Mourinho says his teams are picked on because of their success 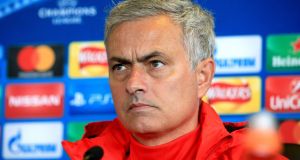 José Mourinho believes the teams he has managed receive more criticism than others because they are serial winners and other people have “different standards” to the Manchester United manager.

Following United’s goalless draw at Liverpool, Mourinho and his side were viewed as having adopted negative tactics, yet they are second in the Premier League after eight matches, head their Champions League group with maximum points and are unbeaten in all competitions.

Asked if the sides he manages attract a greater level of criticism, Mourinho said: “It’s my fault, because people are used to my teams getting good results and winning titles. Other people have more time than I have [to criticise] . Other people have different standards than I have, and that’s not a problem for me at all. We are going to lose matches, that’s obvious, and I can imagine we are going to have even more criticism than we have now. But honestly, that is no problem.”

Mourinho has also claimed two Champions Leagues, the Europa League and its predecessor, the Uefa Cup.

Asked if jealousy may be part of the reason for the criticism, the 54-year-old, whose side face Huddersfield today, said: “I don’t care about what it is. I simply don’t care. No, it’s not a motivation. It doesn’t change my mind or my stability. We work hard, we try to do the best we can and get the best possible results.”

After the victory at Benfica, Mourinho criticised managers who use injuries as an excuse. This irritated Chelsea’s Antonio Conte, who believed he was the person being targeted.

But Mourinho said: “I don’t speak about him. I don’t know why he speaks about me. Maybe it’s not his fault – maybe it’s the journalists’ fault when probably they’ve passed him a wrong message.

Mourinho expects Zlatan Ibrahimovic to return in December, but he still does not know when Paul Pogba will recover from a hamstring injury.

“If you ask if he can play next week against Tottenham, then I don’t know,” he said, before being asked why Pogba is being treated in Florida. “You will have to ask Dr McNally [the head of the medical department]. He is responsible for that. I’m in control of the players who are available. I’m not happy or unhappy [about Pogba] – it’s not my responsibility.”