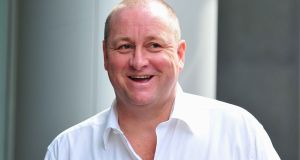 Mike Ashley has confirmed that he is actively attempting to sell Newcastle United. Although the Sports Direct owner has been open to offers for the club since the turn of this year, Ashley has now instructed St James’ Park officials to issue a formal statement clarifying his intentions for a swift exit.

Andrew Henderson, the lawyer for Ashley’s company St James’ Holdings, revealed the hope is to conclude a sale by Christmas. He said: “Our intentions are to see if the club can be bought by new ownership by potentially Christmas. That would allow seriously interested parties to put themselves forward. It would allow a diligence period to carry on, then hopefully by Christmas a sale could conclude.”

Justin Barnes, a lawyer and longtime Ashley associate, has been involved with Newcastle throughout 2017, with his role primarily involving identifying a buyer. It is understood non-disclosure agreements have been signed with more than one party – with interest believed to have come from China – but no formal offer has yet been made or accepted.

This week’s Chinese communist party congress in Beijing from Wednesday could prove crucial in facilitating any takeover as it is thought President Xi Jinping will determine whether Chinese consortia and individuals are once again permitted to invest in foreign football clubs.

Released late on Monday afternoon, Newcastle’s statement read: “As a result of increasing press speculation regarding the future of Newcastle United, the owner of the club, St James Holdings Limited, wishes to clarify its intentions. As one of the Premier League’s oldest and best-supported football clubs – and for the benefit of its many fans and supporters in the UK and across the world - Newcastle United requires a clear direction and a path to a bright and successful future.

“To give the club the best possible opportunity of securing the positioning and investment necessary to take it to the next level, at what is an important time in its history, its present ownership has determined that it is in the best interests of Newcastle United and its fans for the club to be put up for sale.

“To give an incoming owner the maximum possible flexibility to make meaningful investment in the club, including in its playing squad, the sale process will give interested parties the opportunity of deferring substantial payments. A process will now commence of identifying new ownership for the club that will be capable of delivering the sustained investment in and dedication to the club that is necessary for it to achieve its ambitions.”