Meanwhile, Cavani, Mbappe, Neymar and Di Maria were all on target for PSG 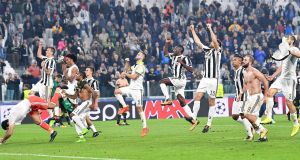 A Dimitris Nikolaou own goal set the five-time European champions on their way but Gerard Pique’s red card just before half-time gave the visitors a glimmer of hope.

Not for long, though, as Messi made it to his milestone with a lovely free-kick before setting up Lucas Digne as Barcelona made light of having just 10 men with quick-fire goals in the second half.

It will have been a great moment for teenager Nikolaou when he slightly redeemed himself by heading home Kostas Fortounis’ corner for a consolation goal in injury time.

As the players emerged from the tunnel at the Nou Camp and out into the teeming rain, a huge banner was unfurled, calling attention to the current political situation in Catalonia.

Olympiacos will have been happy with their start, restricting the hosts to just an early half chance which Luis Suarez could not quite reach well enough to make a telling contact.

However, the Greeks fell behind after 18 minutes when Nikolaou stuck out a leg to divert Gerard Deulofeu’s cross into his own net.

That affected the confidence of an Olympiacos team who have won only one of their last five matches domestically, and Paulinho had an effort ruled out for offside shortly afterwards before seeing a header hit the crossbar midway through the first half.

Vadis Odjidja-Ofoe had the visitors’ first effort of the match after 36 minutes with a dipping volley that dropped just wide.

Olympiacos were then presented with a possibly route back into the match two minutes before half time when Pique was sent off. The Barcelona defender was booked early on for a cynical pull back on Odjidja-Ofoe and he received a second yellow card when Scottish referee Willie Collum decided he tried to deliberately score with his hand from a Deulofeu cross.

Deulofeu was replaced by Javier Mascherano at the break as Barcelona boss Ernesto Valverde sought an alternative at the back for Pique, while Olympiacos manager Takis Lemonis made an attacking switch as he brought on striker Uros Djurdjevic for midfielder Guillaume Gillet.

It was to no avail, however, as Messi doubled the lead for the 10 men after 61 minutes with a lovely free-kick.

The Argentina international was brought down by Nikolaou just outside the penalty area and regained his feet to curl the ball over the defensive wall and beyond the goalkeeper.

Three minutes later, Messi set up Digne to score with a low finish and put the game beyond doubt.

Messi was clearly enjoying himself and teed up Paulinho before Olympiacos goalkeeper Silvio Proto completed a brilliant double save by repelling Messi’s follow-up.

Despite their numerical advantage the visitors struggled to create anything of note until Nikolaou went part way to atoning for his own goal by heading a consolation goal at the beginning of injury time for the group’s bottom club.

With both sides having already beaten Olympiacos and lost to Barcelona, this was a crucial game in what appears a race for second spot in Group D.

Sporting went ahead in the 12th minute through an Alex Sandro own goal but Miralem Pjanic equalised in the first half and, just when it looked like Juventus would have to settle for a draw, Mandzukic secured a 2-1 victory.

Massimiliano Allegri’s side have wobbled in Serie A recently, failing to beat Atalanta after taking a 2-0 lead and then losing at home to Lazio at the weekend.

And their woes deepened with an opening goal for Sporting that was a personal horror show for Sandro.

Having allowed a Bruno Fernandes through ball to reach Gelson Martins, the defender then diverted the ball into his own net after Gianluigi Buffon pushed it against him in saving the shot.

Juventus responded well and Rui Patricio needed to be alert to keep out a Sami Khedira shot that was heading for the bottom corner.

Jeremy Mathieu then helped out his keeper with a crucial touch to deny Mandzukic before Paulo Dybala poked a shot wide.

There was nothing defenders or keeper could do to prevent Pjanic equalising in the 29th minute, however.

Rodrigo Battaglia was penalised for a foul on the Bosnian just outside the box and Pjanic curled the free-kick over the wall and into the corner, leaving Patricio rooted to the spot.

The momentum stayed with Juventus for the rest of the half but they could not find another goal, with their best effort coming just before the break when Patricio pushed Gonzalo Higuain’s powerful volley around the post.

Allegri was clearly unhappy with what he had seen and sent his players back out early for the second half.

The viewing did not become any easier for the Bianconeri faithful as Sporting kept Juve at arm’s length, denying them any clear-cut opportunities.

Allegri threw on Douglas Costa and immediately got his reward as the winger created the winning goal within seconds of his arrival.

Costa sent over a terrific cross from the left, matched by the quality of Mandzukic’s diving header.

Sporting had one glorious chance to equalise but Seydou Doumbia was unable to get a touch on Fernandes’ pass with the goal gaping.

Paris St Germain's feared attacking trio all got on the scoresheet as the French side completed a comfortable 4-0 away victory over Anderlecht in their Group B clash.

Kylian Mbappe, Edinson Cavani and Neymar all netted, while Angel di Maria added a fourth with a late strike, in a win that maintains the Ligue 1 side?s 100 percent record in the group stage with three wins from three.

They head the standings with nine points from second-placed Bayern Munich, who have six. Celtic are in third with a single victory to their name, while Anderlecht are still searching for their first points.

PSG should have won by a greater margin as they spurned a number of chances and will be confident of victory when the teams meet again in their next fixture in the group in Paris on October 31st.

The Azerbaijanis, who were trounced 6-0 by Chelsea in the first round of Group C fixtures, battled their way to a 0-0 stalemate despite the second-half dismissal of striker Dino Ndlovu to leave the Spanish aristocrats with just a single point from their first three games.

Atletico enjoyed the better of the first half, but were unable to make the pressure tell with Yannick Carrasco, Saul and Antoine Griezmann all forcing saves from Sehic and Jose Gimenez stabbing a shot just wide five minutes before the break.

As they continued to frustrate the visitors, the Azerbaijanis grew in confidence and Atletico keeper Jan Oblak had to field Richard Almeida’s curling 63rd-minute effort from distance before Pedro Henrique screwed a close-range effort wide seconds later.

Ndlovu was booked for the second time for diving with 15 minutes remaining and although Griezmann blasted wide deep into stoppage time, Qarabag held out.

Goals either side of halftime earned Basel a 2-0 win at CSKA Moscow on Wednesday to keep the Swiss side in second place in Group A.

Midfielder Taulant Xhaka sped past CSKA’s sluggish backline and unleashed a powerful low drive that beat veteran goalkeeper Igor Akinfeev in the right corner to put Basel up in the 29th minute.

Basel thought they had scored another early in the second half when Albian Ajeti’s drive beat Akinfeev, but referee Bjorn Kuipers ruled offside. After a string of missed chances, Dimitri Oberlin added another for Basel in the 90th minute.

The disallowed goal re-energised CSKA but they were unable to use the momentum to get on the scoresheet.

CSKA’s best chance came in the 76th minute when a powerful header by Mario Fernandes floated just over the bar.

Both sides were cautious early in the match, failing to set the pace and create space to generate scoring opportunities.

Basel set-pieces that could have unsettled CSKA were off target or floated into the hands of Akinfeev. But the Swiss side succeeded in shutting down CSKA’s offence and conceding no shots on target.

Basel climbed to second place in the group on six points, three behind leaders Manchester United. CSKA are third on three.