Manchester rivalry now second to none in European game

Under Guardiola, City are throwing down the gauntlet to their great rivals, United 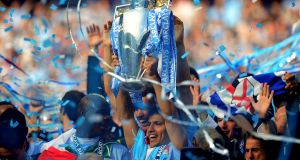 In the course of a voyage around the cradle of the professional game in England’s north-west for his just-published book called On The Brink, the author Simon Hughes alights in Droylsden, east Manchester.

Hughes speaks to Dave Pace, the owner-chairman of semi-pro Droylsden FC, who relates a telephone conversation with Manchester City from the summer of 2007, as the former prime minister of Thailand Thaksin Shinawatra was taking over the club.

“City’s trophy cabinet was pretty bare,” Pace tells Hughes. “I took a call from someone at City asking if they could borrow our four cups.”

If it was laughable in 2007, a decade on the idea of Manchester City borrowing silverware from their local non-League club to impress outsiders is fantastical.

Shinawatra, it transpired, was just a dubious staging post in the club’s ownership, a transition that has seen City go from a third division club in 1999 playing Walsall and Lincoln City in front of 25,000, sometimes less, at a creaking Maine Road, to Premier League champions at the glossy, if not full, Etihad Stadium in 2012.

City went from managers like Frank Clark and Joe Royle to Roberto Mancini and Pep Guardiola; from players like Kevin Horlock and Shaun Goater to David Silva and Sergio Agüero. City have won five trophies since 2011.

Under Guardiola they look set to replenish the cabinet again this season. In the quarter-final of the League Cup, City have won their Champions League group. They are eight points clear at the top of the Premier League. City are all go.

Of course the club challenging them most closely in the league are Manchester United, which makes the 175th derby between the two at Old Trafford on Sunday, well, special. There is a dynamism to Guardiola’s City, there is a swell to Jose Mourinho’s United.

The inter-Manchester relationship has not been this way since the late 1960s but City, once again, have parity of esteem in Mancunian football. They are net contributors to Manchester’s sense of itself as a global football capital.

Back when City were dialling Droylsden, United had won the league again and were bound for a Champions League triumph.

But that City is gone. No more is this “a hole-in-the-sock sort of club”, as Niall Quinn dubbed City, no more the club where, as Paul Lake revealed, comedian Eddie Large once gave the half-time team talk in a Deputy Dawg accent – Bournemouth, home, May 1989, when a 3-0 interval lead became a 3-3 draw.

Football has undergone rapid commercial development since City’s third division days and at some clubs the change has been transformational. Like Paris St Germain or RB Leipzig – dare one say it, like MK Dons – City have shed their former skin and become a new animal altogether.

The move from Maine Road preceded the Abu Dhabi takeover in 2008, but both have had an effect on Manchester. One altered the city’s literal football geography, taking City away from Moss Side to the east, the other altered the sporting power within its boundaries.

Mourinho oversaw two trophy wins in his first season at Old Trafford, whereas Guardiola won nothing and some began to question whether he was the coach of Barcelona renown

Manchester City’s sudden surge of wealth meant that no longer would United take local dominance for granted, something demonstrated graphically on the last day of season 2011-12 when Agüero’s injury-time goal gave City the Premier League title over United on goal difference.

United responded the following season under a charging Alex Ferguson to finish 11 points clear of their second-placed neighbours; but in terms of the balance of local power, since Ferguson’s retirement once that title was secured, there has been a shift – in the past four seasons City have finished above United in the Premier League.

United have still won things: the FA Cup in 2016, the League Cup and Europa League last season, and they have broken their transfer record in signing Paul Pogba. They have also recruited in Mourinho a manager of profile and personality after the let-downs of David Moyes and Louis van Gaal.

Mourinho oversaw two trophy wins in his first season at Old Trafford, whereas Guardiola won nothing and some began to question whether he was the coach of Barcelona renown.

He has answered that this season, emphatically. City are scoring over three goals a game in the Premier League and are unbeaten. Mourinho will point out that United have just scored three at Arsenal and four at Watford.

Expansive creativity is not all blue but there is a direction of travel. Guardiola has state funds to draw on – from Abu Dhabi and China (13 per cent) – and the investment in infrastructure is yielding young players of the calibre of Phil Foden and Brahim Diaz. Youth football is something they have always cherished at Old Trafford.

Optimism? What should encourage West Ham and Moyes is that the lower half of the Premier League contains much mediocrity. If West Ham cannot rouse themselves, they and Moyes will deserve relegation

So there are elements to an inter-city rivalry that makes it fresh despite its history. Football has been played so long in Manchester that it was first banned in 1608 but even on a weekend when Liverpool meet Everton and Juventus face Inter Milan, that freshness means Manchester will feel like the centre of European football.

As the two teams emerge onto the pitch, the music from the Stone Roses will tee it up: This Is The One.

Had things been different, David Moyes would be four years into a six-year contract at Manchester United. As it is, he is with his third club since been brutally cut adrift at Old Trafford.

It gets no easier, though. At West Ham Moyes has been in charge for four games and has lost three. There has been a draw at home to Leicester but next up at the London Stadium are Chelsea and Arsenal.

West Ham are second bottom, their fanbase is lurching unhappily from mockery to blind loyalty to walking away and the Under-23 team has just been thumped by Luton.

Optimism? What should encourage West Ham and Moyes is that the lower half of the Premier League contains much mediocrity. If West Ham cannot rouse themselves, they and Moyes will deserve relegation.

Given Celtic’s unbeaten domestic run stands at 67 games, it would be unwise to state with confidence when it is going to end.

But Sunday’s lunchtime trip to Hibernian, coming five days after the disappointment against Anderlecht in the Champions League, at least leaves scope for speculation. For once, a Celtic victory does not look a formality.

Under Neil Lennon, Hibs are one of the sides to have at least pushed Celtic close to a first domestic defeat since May 2016. Hibs led at Parkhead with ten minutes to go in September.

Celtic fans could probably think of worse managers to lose their record to than Lennon. And a defeat would give them another reason to sing of 67.