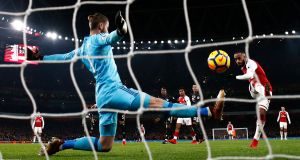 How did Arsenal not win this match? Actually scratch that. How did Arsenal not win this match 6-3, or at the very least end up drawing it? This is not a rhetorical question. There is an answer. The main reason this didn’t happen and why instead Manchester United were able to extract a stirring, ruthlessly executed 3-1 away win is because David de Gea produced a performance of relentless brilliance in goal.

For an hour at the Emirates, as Arsenal surged back from the indignity of conceding a 2-0 deficit, De Gea was a one-man spider’s web, leaping and tumbling and spreading his limbs with startling grace and agility to keep Arsenal at bay.

Most notably there was a mind-boggling double-save 11 minutes into the second half, De Gea plunging with whip-crack speed to get a hand to Alexandre Lacazette’s low shot, then leaping up to deflect Alexis Sánchez’s follow-up over the bar.

This was goalkeeping that seemed to bend the normal physical rules, that defied any sense of reasonable cause and effect. As De Gea ambled off to retrieve the ball, Arsenal’s players looked genuinely pained not to have scored, ready to appeal, fruitlessly, to the referee, or the fourth official, or God.

Except at the Emirates, God was wearing a turquoise shirt and playing in goal for the visitors. With United 2-0 up early on, there was a brilliant first-half save from Lacazette that almost got lost in the scramble, De Gea showing bravery and outstanding reflexes to deflect the ball up on to the bar from point-blank range.

Shortly afterwards he produced something just as hair-raising. Romelu Lukaku, defending in extremis at the back post, propelled the ball towards his own goal off a shin. De Gea leapt, adjusted in mid-air and clawed it away with the spatial awareness of an Olympic diver.

Afterwards Arsène Wenger mused on fairness in football, but was honest enough to put the blame for defeat on his own players’ lack of ruthlessness. Plus, of course, goalkeepers have always been the most deceptive of random elements in football. A good or bad goalkeeper skews and remakes the narrative, just as here De Gea’s brilliance helped turn a dominant performance from Arsenal into a home team picked off with surgical brilliance on the break.

Make no mistake, this was a tide that for long periods seemed to surge only one way. Arsenal made 562 passes to United’s 147. Arsenal had 12 corners to United’s one, 75 per cent of possession and 33 shots to United’s eight. Running under all this like a constant riff, De Gea made 14 saves across 90 minutes.

It is hard to remember a routine one. Some were almost throwaway moments of brilliance, an everyday plunge down to palm away, a bog-standard last-ditch block with the legs. De Gea has an endearing habit after each save of simply standing up and mooching off back into position, while lesser goalkeepers might be up on their feet punching the air, roaring with triumph, high-fiving the nearest team-mate.

But then he plays so well so often that the idea of goalkeepers altering the way a game should or would have gone starts to fall apart. Goalkeepers are, after all, part of the team too, in many ways the most important bit. Every great team tends to have a great goalie.

As do some almost-there teams, like this evolving Mourinho United, who were also thrillingly decisive in attack when the moments came. It was that kind of game. For the opening 10 minutes United were brutally efficient in taking a 2-0 lead. For an hour they were reliant on the maniac in the gloves to keep Arsenal to just the one in reply from Lacazette. Finally United were dogged and depleted, Paul Pogba having capped an otherwise fine performance by getting himself sent off for a stamp on Héctor Bellerín.

For all that, the opening goal arrived with disarming ease as Arsenal’s defence collapsed at the first hint of pressure like a fine-milled wafer biscuit dunked in a mug of boiling tea. Pogba gave the scoring pass, but the author of the goal was Laurent Koscielny, whose horrible cross-field waft was intercepted by Antonio Valencia.

Pogba paused, drew three defenders and played a perfect little back-spun nudge to Valencia. His low shot went through first Nacho Monreal’s legs and then those of Petr Cech for a double Ecuadorean nutmeg – always a popular thing at this time of year in the coffee chains of north London.

Seven minutes later Jesse Lingard added a second, helped by Anthony Martial’s wonderful reverse pass. In the second half there was another for Lingard after a fine break. In between it was over to De Gea who just kept plunging and grasping and clawing away, always with a bit of a shrug, producing in the process surely one of the great Premier League goalkeeping performances. – Guardian