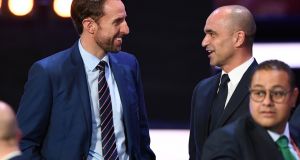 Gareth Southgate has been told he will keep his job even if England lose all their group stage matches at Russia 2018, according to the FA chief executive, Martin Glenn, who gave him an overwhelming public vote of confidence.

The backlash would be considerable if England do not find their way out of Group G containing Belgium, Tunisia and the World Cup debutants Panama. But Glenn insisted even failure to reach the knockout stages of the tournament would not automatically spell the end for Southgate.

“Gareth has a long-term contract,” said Glenn. “He’s not looking at Russia as a free pass. The World Cup’s a really important staging post for our development, I think. We go out there wanting to win it but also being realistic. No one wants to have a bad World Cup but we’re confident he’s the right guy to take us through for the next few tournaments.”

Glenn pointed to England’s recent age-group success, including victories at the Under-17 and Under-20 World Cups, as a reason why there would be no kneejerk reaction even if the senior team fail to get out of the group for a second consecutive World Cup. “We’re going to do it in a way that’s sustainable. So we’re going to make sure that we’re picking the kind of players that can do their best in Russia and continue to kick on in 2020 and 2022.

“What we’re doing is making sure that players that have made it through to the first team by 21, 22, have had lots and lots of tournament experience. So those under-17 winners and under-20 winners will be coming through and they are serious competitions to win. We know that worked for the Germans and we know that worked for the Spanish, so we’re just repeating things they’ve done with our own emphasis on it.”

Southgate was appointed on a four-year contract in November 2016 after Sam Allardyce’s one-game, 67-day reign ended following a newspaper sting. Before him Roy Hodgson resigned after four years when England suffered a humiliating defeat to Iceland, which sent them out of Euro 2016. Glenn said recent underwhelming performances at major championships had tempered expectations on the current team.

“After three disappointing tournaments, come back to a proud nation,” he said. “Wherever we go, a performance at the World Cup that’s created a buzz, got people excited. For me, it’s recreate the excitement that a lot of us remember from the past but, probably, a generation of people haven’t really experienced. I think that’ll be brilliant.”

England avoided teams such as Germany and Brazil in Friday’s draw at Moscow’s State Kremlin Palace but Glenn refused to subscribe to the idea that it was the best draw England could have hoped for. “I don’t think any draw’s a dream draw,” he said. “We are up against one of the top teams in the world in Belgium. They’re ranked four or five. We know a bit about Tunisia. I think we played them in the first game in the ’98 World Cup. We’ve never played Panama so we need to get prepared for those games.

“There was definitely a [possible]group of death but no one got it. And no one got an absolute patsy draw either. History says the small teams in the World Cup refuse to play like small teams.” – Guardian service