Republic of Ireland and Spain could meet at Euro 2020 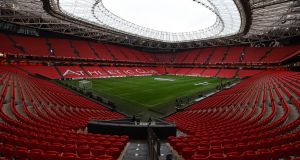 Estadio de San Mames in Bilbao has a capacity of just over 53,000. Photograph: David Ramos/Getty Images

The Republic of Ireland will share a group with Spain if both teams qualify for Euro 2020 after Dublin and Bilbao were paired as hosting cities under the novel new format for the tournament.

Uefa announced the pairing arrangements on Thursday and also confirmed that the four games that were due to be hosted in Brussels will be moved to Wembley Stadium in London due to delays in the development of the new Eurostadium in the Belgian capital.

Bilbao’s San Mames stadium, home to Athletic Bilbao, has a capacity of just over 53,000 and will host the finals of both the European Champions Cup and Challenge Cup in rugby next May. The games in Dublin will take place at the Aviva Stadium.

London will now host seven games after Uefa decided to reallocate the three group-stage games and one last-16 game originally given to Brussels because of delays in the project to build a new 60,000-capacity stadium on the site of Heysel.

Cardiff’s Principality Stadium and Stockholm’s Friends Arena – the venues for last season’s finals of the Champions League and Europa League, respectively – had hoped to pick up Brussels’ games.

However, Uefa opted for Wembley, which has already been chosen as the venue for the semi-finals and final.

Glasgow’s Hampden Park had been hoping to stage the tournament’s opening game but that honour has gone to Rome’s Stadio Olimpico.

As well as deciding where the first game, on June 12th, will be and what to do about Brussels’ difficulties, the executive committee also announced where each of the six groups’ games will be played.

Baku and Rome will host group A, group B’s games will take place in Copenhagen and St Petersburg, Amsterdam and Bucharest get group C, Glasgow and London will share group D, group E will be staged in Bilbao and Dublin, while group F’s fixtures will be in Budapest and Munich.

In a statement, the Football Association of Wales said it was “extremely disappointed” with the news its bid for four Euro 2020 games had been unsuccessful.

“Over the past four years, Wales has successfully staged three Uefa events – firstly, the Super Cup final in 2014, followed by the men’s and women’s Champions League finals in June this year,” it said.

“Uefa ranked the Champions League final as one of their best events and praised the way in which the Cardiff 2017 local organising committee delivered the showpiece.

“The concept of taking Euro 2020 to 13 different countries was devised to allow smaller countries, like Wales, to have a unique opportunity of being involved in staging a major tournament. Wales has never staged a Euro or World Cup final and this was its one and only chance of doing so.

“The FAW complied with all of the bid requirements and has written to Uefa to request feedback on the decision so that it can understand the reasons behind the vote for future reference.”

The statement concluded by wishing Uefa and Wembley all the best and saying it would now concentrate all its efforts on ensuring Wales qualify.

While the decision has come as a blow to the Welsh, and Belgians, it is a major coup for the Football Association, London and Wembley Stadium, which hosted several games in the 1996 tournament.

And if England qualify for the tournament, they will play at least two group-stage games at Wembley, just as Ireland and Scotland will get two home games if they reach the tournament.

Speaking at a press conference in Nyon, which was broadcast on its website, Uefa president Aleksander Ceferin said the decision to take the games from Brussels was unanimous after the Belgian authorities failed to provide guarantees the new stadium would be ready.