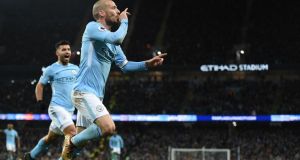 Manchester City again frustrated Manchester United by grabbing a late victory and all three points. The score showed 1-1 and the clock 83 minutes when Pep Guardiola’s men produced yet another dramatic winner.

Kevin De Bruyne nonchalantly flicked a ball over from the right and there was an acrobatic David Silva to hit home. This sent the Etihad Stadium into raptures, made it nine points claimed in the closing eight minutes of matches this term, and ensured City remain eight points ahead of United. The Manchester derby is next up, at Old Trafford on Sunday, and José Mourinho’s men must surely win that to keep their title hopes realistic.

For City, victory meant they have equalled the single-season record for consecutive Premier League wins, at 13. Beat United and they will surpass the mark achieved by Chelsea last season and by Arsenal at the end of 2001-02, which the Gunners extended by one game in August to set the division’s overall record of 14.

As Vincent Kompany and Fernandinho are a booking away from a ban, Guardiola rested them with an eye to the derby, along with Ilkay Gündogan and Gabriel Jesus. Leroy Sané was included, despite also being one yellow card from a suspension, as Mangala, David Silva and Danilo also came in.

For West Ham, David Moyes was forced to leave out Joe Hart, who is a City loanee, and the injured Winston Reid. Dropped were André Ayew and Marko Arnautovic, as Adrián, Declan Rice, Edimilson Fernandes and Michail Antonio were all named.

Moyes fielded a packed five-man defence and the early sense was that attacks would consist of a lump-it approach that hoped to capitalise on Antonio’s directness. It was via this route that West Ham United claimed their first corner, along the right, after the No30 drove into the channel. Aaron Cresswell took this, found Cheikhou Kouyaté’s head, and City panicked for a moment as Antonio was free to connect but could not direct the finish.

When West Ham played the quick stuff City love to do they, too, posed a problem. Manuel Lanzini and Arthur Masuaku combined down the left, the latter pinged a low ball in, and a brief mix-up between Ederson and Eliaquim Mangala nearly allowed Antonio to capitalise before the goalkeeper grabbed the ball.

The manager’s hope of trying to stymie City worked as the first half aged and the home side struggled for tempo and rhythm. Having decided to surrender the initiative, both territorially and via their manager’s selection, West Ham gradually edged into the contest.

Lanzini warmed Ederson’s fingers and won a corner. While nothing came of this any fear the strugglers might concede early were unfounded, the game remaining goalless as the 40-minute mark came and went.

And, 60 seconds before the break, it got even better for West Ham as they took the lead. When Cresswell took a short corner from the right City slumbered and Lanzini had an age to return the ball. The No3’s delivery found the head of Angelo Ogbonna and though Nicolás Otamendi might have got closer the finish allowed Ederson no chance as the Italian claimed a first Premier League goal.

West Ham’s lead was deserved and at the interval Guardiola’s challenge was to earn his salary by turning this around. To do so he brought on Jesus for Danilo and now Sergio Agüero had a central attacking partner.

While the aim was to pin the visitors back instead, City had to defend an early second half corner. They did so and now the home crowd found their voice and the sky-blue shirts came close to an equaliser. Fabian Delph, Sané, Jesus and Silva swapped passes along the left before Raheem Sterling’s shot was repelled.

Now, though, City made the breakthrough, created by Jesus. The Brazilian did admirably to squeeze in a low ball and Otamendi, positioned where you would expect to find a centre-forward, beat Adrián with a poacher’s finish. This was the Argentinian’s fourth goal in his last 14 games, a fine return for a centre-back.

Adrián was performing impressively in Hart’s absence. Next, he ensured his team stayed level by flinging himself to the left to keep out a Sané rocket. Yet all of this meant that West Ham’s previous solidity was no more.

The contest had quickened, to City’s benefit only, but just as David De Gea sparkled in United’s win at Arsenal on Saturday, so too Adrián. After stopping a De Bruyne laser, he denied Jesus, as West Ham continued to cling on.

Ultimately, though, they failed to do so courtesy of Silva’s second league finish of the campaign, though Diafro Sakho missed a gilded chance right at the end to snatch a draw.