Belgians win at Parkhead but Bhoys into Europa League 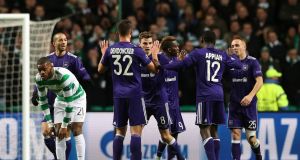 The big picture shows this as a box ticked by Brendan Rodgers and Celtic. From a Champions League section which also included Bayern Munich and Paris St-Germain, Europa League football after Christmas was always the fairest of targets.

Nonetheless, Celtic confirmed third place in flat fashion and with only three points. Victory in the head-to-head scenario with Anderlecht was necessary to extend Celtic’s European stay, after the Belgians secured success in Glasgow which should really have been by more than one goal. Celtic were second best in every department.

Rodgers is rightly lauded in these parts for a domestic record which continues as unbeaten in 67 games. Yet it would be remiss of onlookers not to pinpoint failings as visible throughout this European campaign. Celtic must improve if seeking to enjoy a Europa League run.

Any sense of Celtic complacency was undermined by their starting line-up. Rodgers named his strongest available team, with Moussa Dembélé returning from injury to spearhead the home attack. In one way, Celtic had a point to prove; 10 matches had passed in group stages of either the Champions or Europa League without them winning at home. Such a statistic contradicts the widely-held notion of this being a venue to intimidate continental opposition.

Anderlecht had shown marked improvement since the 3-0 reverse to Celtic in Brussels. And yet, like the Scottish champions, they had found Group B a struggle; Anderlecht arrived in Glasgow having scored just one goal in the section.

That should have been doubled during the opening exchanges in which Anderlecht were by far the more composed team. Henry Onyekuru cut the ball back for Sven Kums, with Craig Gordon forced into a smart save with his legs. With Celtic struggling to impose themselves on proceedings, Adrien Trebel was the next to test Gordon courtesy of an acrobatic effort.

If there was concern for Anderlecht during the first half, it resonated in the failure to turn dominance into meaningful reward. The probings of the visiting captain, Sofiane Hanni, caused all manner of problems for the Celtic defence with Rodgers’s team woefully unable to retain possession when in the Anderlecht half. Dembélé had been a peripheral figure, with Anderlecht’s goalkeeper Frank Boeckx not required to make a single save before the interval. And yet, with the match scoreless, Celtic remained in a perfectly comfortable position in context of the group.

Rodgers had identified Anderlecht’s grip on the match to the point where he replaced two of his more ineffectual players, Stuart Armstrong and Scott Sinclair, at the break. The Belgians again opened on the front foot, though, with the outstanding Hanni narrowly failing to connect with a Pieter Gerkens cross just six yards from goal. Celtic’s response arrived via Dembélé, who fluffed his lines having cleverly cut inside from the left to evade the visiting defence.

The lack of edge to this fixture had long since been apparent. Quite possibly because of how strong their advantage over Anderlecht was, Celtic didn’t have much incentive to significantly raise their game. Hein Vanhaezebrouck’s team were clearly and negatively influenced by their inability to score. With Celtic showing improvement in display, James Forrest sought to rub salt into Belgian wounds with a curling effort which Boeckx scrambled wide of a post.

Fortune was soon to favour Anderlecht at the other end, albeit their lead was deserved. Sloppy Celtic defending allowed Dennis Appiah possession on the right, with the defender’s cross seemingly straightforward for Jozo Simunovic to clear. Instead, when perhaps worried about the interventions of Gerkens behind him, the centre-back miscued a header beyond Gordon. Anderlecht celebrated in a fashion which implied their aspirations of remarkable Europa League salvation had been revived.

Simunovic could have atoned for his blunder with a 67th minute half-volley which instead flew over Boeckx’s crossbar. Dembélé squandered another chance, 18 minutes from time, after Kieran Tierney had fed him at the end of a typically marauding left wing run. This was to be Dembélé’s last act as the France striker limped from the field to be replaced by the PSG loanee Odsonne Edouard.

Hanni almost intensified a slightly edgy Celtic Park scenario with a 20-yard drive which had Gordon worried. Thankfully for Celtic, this proved the extent of their fright.