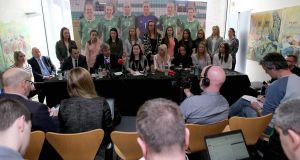 Members of the Republic of Ireland women’s team hold a press conference at Liberty Hall in Dublin. Photograph: Donall Farmer/Inpho

At one stage during Tuesday’s rather astonishing press conference by the women’s national team and their various union representatives, Emma Byrne claimed she was unaware that John Delaney was currently out of the country. If she really was, then she must have been the only person in Liberty Hall that did not know the FAI’s chief executive was in Helsinki, where on Wednesday he is up for election to Uefa’s executive committee.

It is hard to know what impact, if any, the women’s national team’s threat to take strike action over the fact that they can’t afford to play for their country might have on the campaign of a candidate for the ExCo. The suspicion, however, would be, not very much at all.

Back at home, though, Delaney and the FAI’s collective reputation took another battering as 14 squad members made the case for modest payments from the association so that amateur players would no longer have to worry about household bills as a result of taking unpaid leave to play for their country.

One presumes Delaney had something grander than this in mind when he said at the launch of the association’s women’s development plan almost two years ago that “Every girl in this county is entitled to the same opportunities every boy has in terms of playing football.”

The sad fact is that the economic realities of the game ensure that that they do not actually get the same opportunities. But the more surprising fact to emerge on Tuesday is that the association does not even think women players should aspire to the same level of choice on the issue of who represents them in meetings.

Byrne did not seem surprised when she was asked about Delaney’s pay. The goalkeeper, who has played more than 100 times for her country, simply replied: “It has nothing to do with what he earns; it’s about making sure our girls can turn up for camps or play for the Irish team without being out of pocket.”

And yet the numbers don’t look good for Delaney. Especially now. The players want €300 per game which, as luck would have it, is the amount the FAI chief executive will be entitled to in expenses for each day taken up with Uefa business. That is on top of the €1,000 a day he earns from the FAI and the €100,000-plus he can expect to pick up as an ExCo member.

He has made a biggish deal at various launches of the importance he places on the development of the women’s game, and on the face of it there have been improvements, such as better hotels and training facilities etc. However, the association’s lack of transparency makes it impossible to gauge how much it receives in grants from outside organisations for this aspect of its work.

It has certainly made much of its commitment to the cause, though, and when Byrne first talked publicly a few years back about the problems the players faced, she was publicly admonished by team manger Sue Ronan, with the clear impression given that there was nothing to complain about.

And it is tricky in the circumstances for the association to plead poverty given how often Delaney claims that it is effectively out of the woods in the wake of its most recent refinancing deal.

The staff still await pay restoration and the players have to give back their tracksuits after changing out of them in airport toilets, but apparently all is well at Abbotstown where, the official line goes, they may or may not decide to pay off their remaining debt by 2020, depending on whether they can spot anything worth spending a bit more money on in the meantime.

With the benefit of hindsight, Delaney might feel it would have been wise to spend a few bob addressing the women players’ grievances, as Tuesday’s press conference was a PR disaster on a scale the association has not seen in quite some time.

It says something about Uefa, though, that neither this PR disaster nor any of the others that preceded it might be enough to prevent him getting elected.