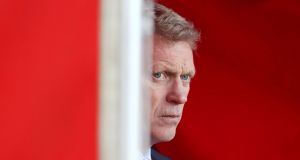 Sunderland boss David Moyes has apologised to a female reporter after threatening to “slap” her in a post-match interview. Photograph: PA

Sunderland have given manager David Moyes their full support amid growing condemnation of his “wholly unacceptable” suggestion that he might slap a female reporter.

The 53-year-old Scot issued a public apology to BBC Newcastle and Radio Five Live reporter Vicki Sparks on Monday after video footage emerged of a controversial exchange between the pair following a post-match interview.

On Tuesday afternoon, the Black Cats issued a statement confirming their position on the matter and offering their continued backing to Moyes.

It read: “Sunderland AFC would like to reiterate the actions taken following the Burnley game on March 18th.

“The exchange between the manager and a BBC reporter was wholly unacceptable and such actions are not condoned or excused in any way.

“David recognised this immediately, proactively bringing the matter to the attention of the CEO (Martin Bain) and apologising to the reporter. The club also spoke with both a senior figure at the BBC and the reporter personally, expressing its profound regret over what had occurred.

“The matter was treated with the utmost seriousness from the outset and the swift and decisive action taken by the club and the manager at the time ensured that it was resolved to the satisfaction of the reporter and the BBC, which was the priority.

“With both the BBC and the reporter agreeing that appropriate action had been taken at the time, the club continues to fully support David in his role as manager of Sunderland AFC.”

The Football Association has asked the club for their observations on the incident, which came as Moyes reacted to a question he did not like after the interview had concluded, but while cameras were still operating.

Both he and Sparks were laughing at the time, but the manager later spoke to the reporter by telephone to apologise and both believed the matter had been resolved.

However, footage of the exchange was published on Monday by a national newspaper and Moyes found himself firmly in the firing line with shadow sports minister Dr Rosena Allin-Khan and Clare Phillipson, director of domestic abuse charity Wearside Women In Need among those to call for action.

Moyes insisted he had never considered resigning and did not expect to be sacked for his misdemeanour, and sources on Wearside had indicated his job was safe before the club said so publicly.

He may yet face action from the FA, but in the meantime, he will concentrate on the task of trying to drag the club from the foot of the Premier League table — they travel to champions Leicester on Tuesday evening.

Davy Russell ponders what might have been for Tiger Roll 17:18
Cycling Ireland thrilled with take-up for Zwift League series 17:02
Racetrack organisation does not envisage any closures in the short-term 15:03
Coronavirus crisis could cost the GAA up to €60 million 14:19
Eddie Hearn: Tyson Fury is Anthony Joshua’s opponent of choice 12:55