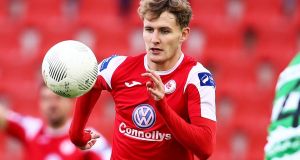 Galway United are still looking for their first win of the campaign after Sligo Rovers came from behind to deny them in this refixed clash at Eamonn Deacy Park.

Galway looked good for victory in the first Connacht derby of the season when the superb Ronan Murray edged them in front after 12 minutes.

It was no more than Galway deserved after a bright opening, with Murray initially breaking forward and crashing a shot off the post. Sligo were unable to clear and a cross was headed off the crossbar by Jesse Devers before Murray followed through to tap home.

But it was Sligo who responded better to the goal, with former Galway player Raf Cretaro impressive. Appropriately, it was Cretaro who set up Kieran Sadlier for the equaliser nine minutes from the break and the former Ireland underage star finished in style.

But both teams fluffed good chances in the closing minutes with Vinny Faherty unable to find the target for the home side, while at the other end Sadlier failed to score from close in.

Meanwhile Finn Harps advanced to the second round of the EA Sports Cup after a 3-1 win over Ulster Senior League Champions Cockhill Celtic at Finn Park.