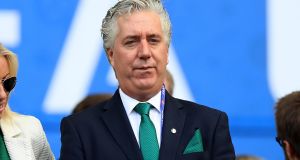 FAI chief executive John Delaney: The association’s leading administrator is in Helsinki where he is up for election on Wednesday to the Executive Committee of Uefa. Photograph: Donall Farmer/INPHO

In the Football Association of Ireland’s strategic development plan launched a couple of years ago, there is a commitment buried on page 31 to new, improved systems of “kit-tracking” and “stock control”.

Perhaps somebody along the line got a little over-zealous because the association surely never intended for one of the national teams to end up holding a press conference in Liberty Hall where they would recount how they had to change in and out of tracksuits in airport toilets because the same garments were required for use by underage players.

In all, 14 members of the women’s national team met the press at Siptu’s headquarters, and though they talked about the tracksuits and the fact that many of them are left under serious financial pressure when they have to take unpaid leave – up to 40 days of it in a year – to play for their country, their most immediate concern is that the FAI refuses to deal with their chosen representatives, the Professional Footballers’ Association of Ireland, at talks intended to resolve their various issues.

Normally, John Delaney might be expected to intervene in such circumstances but the association’s leading administrator is in Helsinki where he is up for election on Wednesday to the executive committee of Uefa.

If successful, the FAI’s chief executive can expect to add in excess of €100,000 to his current €360,000 salary plus a €300-a-day allowance for every day his time is actually taken up with federation business.

“It has nothing to do with what he earns,” said Ireland goalkeeper and long-time team captain Emma Byrne at the press conference, though. “It’s about making sure our girls can turn up for camps or play for the Irish team without being out of pocket.”

Teammate Karen Duggan noted amateur players were giving up as much as two months out of their annual salary. “We’ve received no reimbursements for six years now. Your five grand or seven grand that you’re missing out on quickly becomes 40-plus grand,” she said.

By a strange coincidence, the players are seeking a match fee for future games of €300, plus assorted bits and pieces. They currently get nothing, the association having long ago done away with the €30 per diem they used to receive.