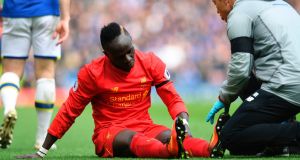 Liverpool manager Jurgen Klopp admits it is possible leading scorer Sadio Mane’s season could be over.

The Senegal international was forced off with a knee injury during Saturday’s Merseyside derby win over Everton, but the club’s medical staff have not yet been able to properly assess the problem.

Further examinations will take place but Klopp admits he could be without the 13-goal winger for their final eight matches as they seek to secure Champions League qualification.

Asked whether the injury could be season-ending, the Reds boss said: “Unfortunately that is possible but why should I say it now when I don’t know?

“The knee is swollen and we have to wait for the final assessment. It is not 100 per cent clear.

“The only thing I can say for sure is that he will not be available for tomorrow.

“It is not very positive when it is like this. I cannot say at this exact time so we have to wait.”

Meanwhile Manchester City manager Pep Guardiola has suggested Gabriel Jesus could be back in action soon after making a swift recovery from a broken foot.

There were fears the impressive new signing — who turned 20 on Monday — could miss the rest of the season but City are pleased with his progress.

Guardiola said: “Yesterday was the first day he started to go to the pitch to run and walk. I don’t know exactly how many weeks he needs to come back but I think he is at the end of the part of the process to come back, so we will see.

“Hopefully he can help us in the last games at the end of the season.”

City have nine Premier League games remaining while they are also still involved in the FA Cup.

Their hopes of winning the title appear to be over as they trail leaders Chelsea by 11 points but they could still have an influence in the race as they travel to Stamford Bridge on Wednesday.

City also need the points to strengthen their grip on a top-four place in what is a tight battle between the top six.

Guardiola said: “Chelsea deserve (to be) where they are. They won an amount of points and were winning an amount of games in a row.

“It is another game — nine left, we have to take points as much as possible to be there and after we will see.

“It is so important for all six teams to qualify for the Champions League. There will be a battle until the end. To be in Europe is so important, in financial terms and in prestige.”

1 Sideline Cut: Vignette shows why Bird is the true shark in The Last Dance
2 The Offload: Philip Browne’s grave outlook should be taken seriously
3 World Rugby study advises removal of reset scrums to reduce Covid-19 risk
4 Patience and a local focus: More clubs should be like Athletic Bilbao
5 Decisions to be made on where to run Guineas and Derby horses
Real news has value SUBSCRIBE