Luke Shaw returns to United squad ahead of Everton match 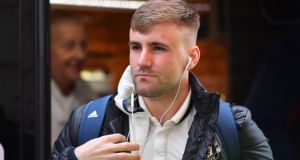 Luke Shaw has linked up with the Manchester United squad ahead of Tuesday night’s clash with Everton having held talks with Jose Mourinho on Monday.

Omitted from the 18-man squad to face West Brom on Saturday, the United boss afterwards launched a scathing attack on the left-back in which he questioned the 21-year-old’s fitness and attitude.

Having been made aware of the criticism on Sunday evening, it’s understood that Shaw held a meeting the following day with Mourinho to discuss those comments at the Aon Training Complex.

The talks appear to have led to a breakthrough, after the England defender was seen checking into United’s team hotel ahead of Tuesday’s Premier League clash with Everton.

The former Southampton player’s future at Old Trafford appeared bleak when Mourinho said he was “a long way behind” his team-mates.

Mourinho added: “I cannot compare the way he trains, the way he commits, the focus, the ambition.”

That prompted former United full-back Phil Neville to tell Shaw to “pull his finger out” to save his Manchester United career.

Neville felt Mourinho was simply trying to give the player the “jolt” — a theory which will look increasingly likely should he be involved against Everton.

“If I was Luke Shaw, I wouldn’t be looking to get out of Manchester United,” Neville said earlier on Monday.

“I’d be looking at that situation thinking that on Saturday (Mourinho) played Ashley Young at left-back, that he has been playing Matteo Darmian at left-back, Marcos Rojo, Daley Blind. These are players who are not out-and-out left-backs.

“So rather than thinking ‘the manager doesn’t rate me’, I’d be thinking ‘I have to pull my finger out here’ and think the opportunity in front of me is absolutely huge, to be the number one left-back at one of the biggest clubs in the world.

“Something has to change for Luke Shaw, because someone with that ability has got to be England and Man United’s number one left-back, and if he’s not, then there is something fundamentally wrong.

“The comments coming from Jose Mourinho suggest there may be an attitude problem or a professionalism problem, and if that is the case, this could be the kick up the backside he needs.

“He needs to probably take a long hard look at himself and realise the opportunity that is in front of him.

“In life, you only get one opportunity at a club like Manchester United, and if you don’t grasp that opportunity, you end up being sold and going maybe back to Southampton, thinking ‘should have, would have, could have’.

“I think it is at that point now for Luke Shaw, where it is time to deliver and become the player that I believe he can become.

“But there is obviously something not quite right with him at this moment in time and I find it sad.”

Shaw has made just two United appearances in the last four months — despite overcoming niggles related to a long lay-off and being fit since mid-January — and been publicly criticised by Mourinho on several occasions.

The England left-back’s last match came a month ago against Bournemouth, when it’s understood that Mourinho was angered by Shaw speaking to an opposition player at half-time.

Relations have been frosty ever since, with Shaw out in the cold despite doing extra sessions at home on top of United training, but Monday’s meeting with the manager, and subsequent invite to join up with the squad, could prove a turning point.