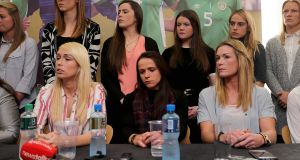 Members of the Republic of Ireland women’s team and their representatives from the Professional Footballers Association of Ireland (PFAI) have refused to rule out a boycott of next Monday’s friendly international against Slovakia as their frustration at the FAI’s failure to deal with the issues they have raised came to the fore at a press conference this morning.

Fourteen members of the senior squad as well as officials from the players’ union and SIPTU were in Liberty Hall for the event at which they said that their various attempts over the last two years to have action taken to concerns over payments for loss of earnings and the general treatment of the squad have come to nothing.

At the heart of the issue, it was repeatedly stressed, has been the association’s steadfast refusal to engage with the PFAI despite the players making it entirely clear that that is how they wish to proceed. “We are leaving it in the hands of the PFAI,” insisted goalkeeper and long-time team captain, Emma Byrne. “We don’t want to deal with it.”

Byrne described it as “humiliating” that the players had had to resort to airing their grievances in public but said that a situation in which various members of the squad were obliged to change in and out of FAI tracksuits before and after trips away because they were not allowed to keep kit was unacceptable.

Players were told, it was reported, that the tracksuits were needed for use by underage teams.

Document issued by the PFAI

PFAI solicitor Stuart Gilhooly said that "we need to recognise that the women's team are fifth class citizens, the dirt on the FAI's shoes."

Issues like that are seen as typical of the association’s inadequate support for the team, something many of the players believe, they made clear, is holding the squad back.

“This is about the women being able to turn up to play for their country without having to worry about bills and their mortgage,” said Byrne, who said that players have received no payments whatsoever in recent years despite the fact that many have to take unpaid leave from their jobs in order to join up with or travel with the squad.

Members of the PFAI say that lawyers have asked for a match fee of €300 per player and payments to cover expenses. The FAI have in return suggested that they have significant proposals to make on the financial side of things but they have indicated to the players in a series of emails that they will only make them directly to squad members as they refuse to allow the PFAI represent any national team.

For their part, the players insist that they have tried to negotiate directly with the association before but that it has not got them anywhere and they are now determined, they say, to have the matter dealt with on their behalf by the union as they believe they are entitled to be represented as they see fit.

“We’re footballers, we’re here to play football,” says Stephanie Roche. “There’s not any of us that are skilled negotiators and to ask us to do that is unfair.”

The FAI issued a lengthy statement after the press conference insisting that they had tried to engage “directly” with the players on a number of occasions but failing to address the players’ assertion that they wish to be represented by the union.