Former Bayern Munich and Manchester United midfielder Bastian Schweinsteiger is asked about the prospects of his new side, Chicago Fire, winning the World Cup in his unveiling press conference. Video: Reuters 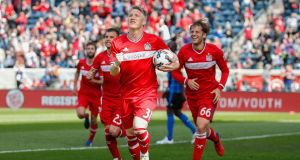 The Chicago Fire are now one point closer to the World Cup. Or at least that was the running joke this week as MLS teams decided to fully embrace comedy in honor of April Fool’s Day. The carnival started on Wednesday when Bastian Schweinsteiger was asked in his inaugural press conference if he believed the Fire could win the World Cup. A media officer scurried in to intercede, clarifying that the reporter in question, Derek Henkle, must have meant the Club World Cup, a trophy Chicago could conceivably win, or at least play for.

Schweinsteiger was good-natured throughout the entire affair, though. He smiled the question away with some platitudes about not thinking immediately about titles of any sort. (It should also be noted that Henkle, a video reporter for AFP, is by all accounts a good egg and even went to the unnecessary length of apologizing to anyone he might have “offended” in an interview with the Telegraph.) The Fire themselves got in on the act too, tweeting a “Road to Russia” missive, as did their local supporters’ group, Section 8, who created a banner with a Cyrillic transliteration of the same. In truth, the joke got old before it ever really got funny, but that didn’t stop the pre-game atmosphere in Bridgeview from seeming buoyant and expectant, welcoming. All eyes would be on Schweinsteiger. It threatened to be one of those MLS occasions where the star outshines the soccer, the debut of Schweinsteiger overshadowing the game itself.

There would be no danger of that, however, as the Fire and the Montreal Impact played to a thrilling 2-2 draw. Schweinsteiger – who else? – opened the scoring with a bullet header in the 17th minute, only for Montreal to equalize through Matteo Mancosu in the 61st. A pair of red cards in the 70th and 80th minutes, one for Chicago’s Juninho and the other for Montreal’s Victor Cabrera, made the contest more open, as both teams stretched themselves looking for a winner. And Montreal thought they found one in the 90th minute, when teenager Ballou Jean-Yves Tabla squeaked a shot through Jorge Bava’s near post for his first ever goal. It looked to be a moment of peak MLS, an unknown 18-year old spoiling a World Cup winner’s debut with a fluky strike from outside the box. It also looked to be peak Montreal, who have turned the practice of stealing wins into an art form.

Chicago, perhaps buoyed by the festive mood, bent but did not break, and pulled the carpet out from under Montreal with a 93rd-minute equalizer from Luis Solignac. It was a fine strike, which Solignac cushioned off his chest before stinging into the back of the net. It served as a fitting capstone to a breathless gamein which both teams felt a draw to be dissatisfying result.

As for Schweinsteiger, he played the game magisterially, bestriding the action more than actually mucking through it. He was a cut above the rest of the crop, and – with his once-famous blond locks now greying at the temples – he looked like an elder statesman in this wild, circus-like game. April Fool’s Day is not a holiday that befits Schweinsteiger any more, and his transformation into a respected veteran is now so total that it is easy to forget this is the same man who was called in front of the German media before the 2006 World Cup for being too waggish, for not taking his role with Die Mannschaft seriously enough. Schweinsteiger is now also exceedingly diplomatic, and when he was asked in the locker room after the game about how he rated the quality of play in MLS, he demurred: “It’s not easy to talk about the level of play after only one game.” It was a savvy, professional answer, and you could tell that a tired Schweinsteiger wanted to talk less to the media, and more on the field.

Before he could go home though, Schweinsteiger had one last April Fool’s Day duty to take care of – a post-game snap with Henkle. One almost wished the reporter had asked: “Other than that, how was the game, Mr Schweinsteiger?”