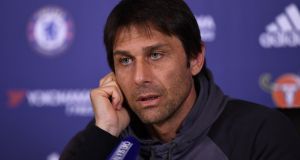 Antonio Conte has suggested Chelsea and Tottenham Hotspur are separated by more than merely seven points at the top of the Premier League.

The Chelsea manager claimed that, while expectation comes with the territory at Stamford Bridge, losing is “not a disaster” for the side who currently head the chasing pack behind the leaders.

Chelsea saw their advantage over Spurs trimmed to seven points, still an imposing distance, over the weekend and will host Manchester City on Wednesday night hoping to restore momentum at the first attempt.

Conte has tended to steer clear of provoking rival managers since arriving in England. But with Tottenham sensing the possibility of moving to within a point of the leaders by lunchtime on Saturday if results go in their favour, the Italian appeared more willing to engage his team’s closest rivals in the aftermath of that defeat by Crystal Palace.

Asked whether the title race would now become a test of nerves between the top two, Conte initially insisted his team’s progress this term should be a source of enjoyment and pride, not least because “nobody thought Chelsea, this season, would fight for the title”.

“We are trying to change the situation,” he said.

“But, I repeat, Chelsea were underdogs at the start of the season but now we are top and we want to keep this position. There are 27 points available, so anything can happen in the league. We need 21 points to win it mathematically but I think we are in a really good position. A position nobody thought Chelsea would be in. Whoever wins this league in the end will have deserved to win it.”

The defeat by Palace was only Chelsea’s second since September, but with Conte wary of the threat still posed by fourth-placed City in the title race, the leaders are expected to opt for a more cautious line-up against Pep Guardiola’s team.

Cesc Fàbregas will drop to the bench with Conte, braced to be without the injured Victor Moses again, exploring his options at right wing-back.

Pedro has been in excellent attacking form this season but was culpable in the role at both concessions on Saturday. If the Spaniard is thrust further forward, then Kurt Zouma or Nathan Aké could come into contention for a starting place.

The manager has not experienced many setbacks since arriving at Stamford Bridge but, having seen Chelsea fail to keep a clean sheet in the league since January, spent Saturday night digesting the Palace defeat and watching footage of it.

“After a defeat it’s impossible for me to go out,” he said. “I needed to understand the reason we had lost. But after I’d watched the game, I wasn’t happy because we didn’t deserve to lose the game for many reasons: we created many chances to score . . . but this is football.

“Against Crystal Palace we played a good game with great commitment and great concentration but we still lost. We have to accept these results. It just wasn’t our day.”

That suggested the defeat was a one-off, rather than indicative of doubt creeping into Chelsea’s title pursuit. The manager will be steeled for what is to come having experienced his team capitulating late on as a player with Juventus in 1999-2000.

Conte has regularly cited the trauma of Lazio overhauling his side’s seven-point lead over the last six games and his outlook in management has been heavily influenced by those memories.

“It’s true, I didn’t sleep for a week after that but these experiences are very important,” he added.

“For this reason I try to keep the concentration from the start until the end. Football is wonderful for this reason. Anything can happen. It gives a lot of joy but sometimes . . . yeah, it’s not always simple.

“I won one Champions League final and lost three. You think that’s not the same? It is. It’s the same. It’s not easy to accept the defeats. But defeat is part of our job, part of our culture. You must accept it but also try in the future to evolve away from defeats. And I know only one way: work and work.”