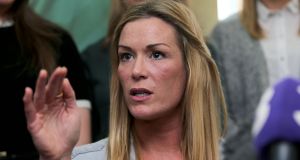 Those looking for a sense of just how far behind men’s football the women’s game here is got a bit of an indication yesterday when 14 members of the senior squad joined officials from the Professional Footballers Association of Ireland (PFAI) and Siptu in Liberty Hall for an unprecedented press conference intended to protest their treatment by the FAI.

It is around 50 years since tales as incredible as their one about having to change in and out of Irish tracksuits in airport toilets because the garments were also required for underage players, were commonplace with the men.

Then again, it’s just over 100 since people were locked out of their jobs because they insisted on choosing who should represent them in negotiations with their employers and yet, somehow, the association essentially finds itself in a union recognition dispute with members of one of its own national teams.

The context may be very different but facts will be all too familiar to those acquainted with the world of work: the players in this instance have made demands and the association have suggested they are willing to discuss them.

Remarkably, though, the FAI seems to think that it should be able to dictate that only actual members of the team can be sitting on the opposite side of the table when any talks take place.

The players’ preference is that the PFAI does their talking for them with one squad member, Shelbourne’s Niamh Reid-Burke observing: “We are all about football. We don’t feel we are skilled as negotiators. We just want to be represented in the same way as other women’s national teams and, of course, the men, who have had agents or other representatives in on their behalf.”

Niamh Fahey of Chelsea, one of the group’s professional players, said they had tried doing the job themselves and had seen where it got them.

For four years they tried to have their grievances addressed, she suggested, with the association having prompted their initial dissatisfaction by withdrawing daily allowances amounting to just €30 back around 2011.

For the past two years, the PFAI has been trying without success to progress the situation on their behalf but the association has continually sought to bypass them insisting, only four days ago in an letter sent directly to all of the players, that: “The association will not and has not ever engaged with the PFAI with regard to our national teams, either men or women, and will only deal with you directly.”

They subsequently made what were described yesterday as “veiled threats” by suggesting that any decision to proceed with a threatened boycott of Monday’s friendly international against Slovakia “will set back the development of the game generally and the development of your own careers as players”.

In a subsequent communication they were warned of the consequences any boycott might have for their club careers and reputations as international players.

The players have, they say, stood firm, insisting that, like the association, they are available for talks at any time but that they will not be dictated to with regard to who would represent them.

Their actual demands, meanwhile, seem modest in the extreme. The squad now want a match fee of €300 per game plus smaller win bonuses with payments for certified loss of earnings for the amateurs and assorted other benefits like gym memberships and personalised strength and conditioning programmes.

“It just comes down to respect and fairness and dignity,” says Fahey. “They have been throwing out statements to the effect that we are not in a position to demand this because we have not qualified for this, that or the other but the fundamentals aren’t in place to get us anywhere near that level.

“How do they expect it when half the squad are worried about bills, time off work and other factors; they don’t have the right conditioning in place … We’re tried to resolve this internally and got nowhere so we’ve had to talk about it externally. Some of the stuff doesn’t sound pleasant when you say it out loud but we’ve got a massive case.”

The PFAI’s solicitor Stuart Gilhooly described yesterday as the team’s “Saipan moment” but suggested the difference this time was: “everyone is here saying this is not good enough”.

One of his colleagues, the former Cork City player, Ollie Cahill, expressed bewilderment that a union whose usual day to day work revolves around the League of Ireland could be deemed unacceptable to the association.

“I’m sure you are aware of all the trials and tribulations that have gone on there down the years,” he said, “but our track record speaks for itself. There has never been the withdrawal of a game, every fixture has been fulfilled. That’s our track record.”

The union is based in the FAI’s offices, he pointed out, so there is no real barrier to communications but, he said, “we’re available any time, they just have to pick up the phone”.

In the aftermath of the press conference the association issued a statement in which it referenced what it sees as some of the improvements made to the running of the team in recent years and touched on some of others it is now proposing in order to resolve the present dispute.

“All efforts to meet directly and discuss these matters have been refused,” it said with the word “directly” effectively confirming the substance of players’ primary complaint in this remarkable dispute; that they are not allowed to choose who represents them in their dealings with Abbotstown.