Emmet Malone: Like anyone who has done a lot of them, I’ve dropped my share of clangers 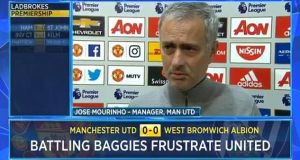 Jose Mourinho speaks to Conor McNamara of the BBC after Manchester United’s 0-0 draw with West Brom on Saturday. Photo: BBC

Post match interviews are tricky things. Sometimes the problem is that they don’t actually quite happen.

Such a time was when a manager was back in Dublin with his side some years ago and, having emerged from the dressing room quite purposefully after the game, he grabbed a notepad out of a female reporter’s hand, signed it, handed it back and kept walking, without a second thought.

Like anyone who has done a lot of them, I’ve dropped my fair share of clangers. The actual reaction that stands out most in the memory a good 20 years on was from the snooker player Eugene Hughes who had just lost in Cork from what looked a winning position. I opened up with what seemed like a harmless: “Disappointed?” He may not actually have confirmed it in the following exchange but afterwards it certainly seemed safe to assume that yes, he had been.

Sometimes you bring this stuff on yourself, even when, as on that occasion, you are dealing with the good guys.

Probably the dumbest question I ever asked during my time in journalism was after a rugby match in Limerick when, having been told by somebody involved with Bohemians that he was a train driver, I asked “who for?”

Even as the two words came out I was trying desperately to stop them but the person involved was too nice to make me suffer for my stupidity and after a slightly bewildered silence, he managed to make his two word reply sound like the most natural thing ever.

Jose Mourinho would not have been so kind, we know that. In an interview with Richard Fitzpatrick for his book, El Classico, Hristo Stoichkov recalls the story of the Spanish journalist who, many years after the Portuguese had left the club, addressed him by the derogatory title commonly used by Barcelona fans: “the translator”.

Mourinho reacted by pointing out that though he might have once been described as such, he had since become one of the game’s most successful managers, working at its greatest clubs and leading them to national and European titles.

The journalist on the other hand, he pointed out, was still doing the same job he had been doing when Mourinho had been on the staff at Barcelona and still appeared, he suggested, to be wearing the same clothes.

Stoichkov reckoned the journalist got what was coming to him and it is hard to disagree but the Bulgarian’s assessment that: “He [Mourinho] is direct. This is the problem for journalists,” is well wide of the mark. Demeaning, though – well that can occasionally be an issue alright.

Mourinho can be hugely entertaining and is usually “good copy” but he has a habit of hiding behind the tactic of setting out to humiliate journalists, as he did with the BBC’s Conor McNamara on Saturday, when things have not gone well out on the pitch. I might be expected to believe as much, of course, but pretty often it is he who seems to come looking a little undignified.

The situation the other day did not look a hugely appealing scenario from the BBC man’s perspective. Manchester United might have had six more points than at the same stage of last season in the wake of the game but they are further off both first and fourth spot. Meanwhile, the team has only scored five more goals than under Louis van Gaal after 28 games which is hardly the sort of transformation that had been hoped for when the Special One arrived. Failing to score at all at home to West Brom was clearly a blow.

McNamara might have left himself open with a reference to the two teams having cancelled each other out in a game that highlights and statistics both suggest was quite one-sided, but the fact that West Brom limited their hosts to just three shots on target despite 75 per cent of possession indicates their gameplan worked and provides a sense of what he was getting at.

Mourinho’s assertion that it was “a silly question” follows on neatly from his suggestion to one another BBC reporter after the Hull game last month that: “If you don’t know football, you shouldn’t be with the microphone in your hand.” The offence on that occasion had been to ask “What, in particular, did you feel that the referee should have pulled them (Hull) up on?” The United boss walked away after replying.

There are countless other examples with reporters like referees, rival managers, league officials and such clearly viewed as fair game when he needs to deflect attention from the fact that he and his team have just come up short.

It would almost seem fair enough were it not for the fact that, on the one hand, those televised post match interviews are generally just about providing a manager with a platform, with interviewers rarely intentionally offering an opinion of their own.

On the other hand, Mourinho can make such a song and dance on the sidelines when Antonio Conte encourages the Stamford Bridge crowd to make more noise at 4-0 on the basis, he says, that it is a calculated attempt by the current Chelsea boss to “humiliate” him.

Chelsea paid dearly when Mourinho did just that to Eva Carneiro and the manager’s reputation was clearly tarnished by the sexist tone that seemed to hang over the event and much of the public debate that followed.

Still, he never threatened to give her a slap even though she was woman as David Moyes did to the BBC’s Vicki Sparks over the weekend. Just about every account of the exchange mentioned that he was smiling, and she was laughing, as he spoke and maybe the pair get on so well that the words would have caused no offence to her although those dismissing it all as “banter” have been a bit too enthusiastic to seize on the jocular tone of the exchange.

The comment is still reprehensible in a professional environment and if she was actually offended, there would, as we have seen in similar situations, have been a certain amount of pressure to simply try and laugh along regardless.

Moyes, to be fair, has since apologised and provided the clarification that: “that’s not the person that I am,” a variation on the defence that attracted some scorn when Chris Coleman effectively applied it to Neil Taylor last week, which actually sounds more ridiculous when somebody says it about themselves.

The Sunderland boss has, in any case, been having a hard of time of it of late and many managers in similar positions will, it seems, happily take the opportunity to shoot the messenger. All the Dublin incident shows really is that sometimes it’s not even deliberate when they make a reporter feel three feet tall.