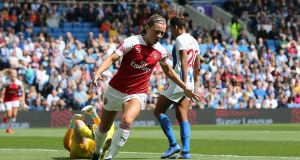 Ireland’s Katie McCabe celebrates scoring Arsenal’s second goal during the 4-0 victory over Brighton at the AMEX Stadium as the Gunners sealed their first title win since 2012. Photograph: : Mark Kerton/PA

On April 29th, 2008, something huge happened in English football, both male and female.

Although the bare 0-0 scoreline between Arsenal Women and Reading Women didn’t see, d earth-shattering, Arsenal had dropped their first points in over 17 months.

It has been 12 years since Vic Akers, and his “Unbeatables” won the first quadruple by a British football team, male or female. That Arsenal team was littered with Irish talent, from goalkeeper Emma Byrne to Ciara Grant and Yvonne Treacy.

In a team that lacked steel going forward and which was also in dire need of a shot of urgency when Australian manager Joe Montemurro arrived in November 2017, they were well and truly out of that title race, having conceded eight goals in three games.

Annoyingly, the talent was there, but all Arsenal needed was direction, a few lessons in being clinical, a strong defence and as Montemurro himself said “a return to the basics”.

Montemurro definitely had the credentials for the job. History was created as Montemurro’s side Melbourne City secured a coveted Westfield W-League Premiership and FFA Cup double, with a 4-1 win over Sydney FC in the final ensuring City ended the season without dropping a single point. So, when Joe Montemurro arrived at Arsenal, he meant business.

First, he had to establish a defence and a solid one at that. Through ensuring defenders had consistent game time, Louise Quinn and Leah Williamson became a formidable duo in defence and in the spring of 2018, the partnership managed to keep a clean sheet in eight consecutive games. Bear in mind, this was a three month turn around from a team that were leaking goals just two months before that run of form.

In addition, , Montemurro built the team s flexible in its tactics and its personnel. The signing of Swiss international and outstanding holding midfielder (or pivot which aptly describes her) Lia Wälti was huge as she had the ability to pass with both feet and was almost impossible to dispossess.

She also assumed a central role in allowing other players to be so positionally flexible. Dominique Bloodworth ranged from central midfielder to the centre back in a back three, and Lisa Evans was converted from winger into full back. All in all, technical and positional flexibility was vital. Take the transformation of Katie McCabe for instance.

Katie McCabe played a phenomenal role in Arsenal securing the WSL crown. In 19 appearances, McCabe has been involved in 20 goals, including a winner against a tough Birmingham side. The best thing about this season for McCabe, and from an Irish point of view, is how versatile she was throughout the season. McCabe played across midfield, as a full back, wherever her coach needed her in a side that was decimated with injuries.

McCabe is now an incredibly versatile threat and a flexible option for Colin Bell and the Irish women’s national team. Her left foot is a rich source of goals, and her ability to bomb down the wings or put defenders on the back foot is vital for the Irish team in their upcoming games.

Technically McCabe, along with Wälti, Williamson and Evans, has become the focal point of the Arsenal team from a technical standpoint, but credit must go to the other Irish international behind the midfield dynamos.

Physically tough and a veteran at the age of 29 in an Arsenal team full of young pups, defender Louise Quinn was one of few players in the whole WSL to play almost every single minute and she, along with her defence, conceded just a total of 13 goals all season, just dropping the six points along the way.

The fact that Quinn was virtually unemployed two years ago due to the Notts County mess is a testament to the player she is. Montemurro values intelligent defenders who can play the ball and read the game and Quinn, along with McCabe, has ample experience and now silverware to her name.

It has been a while since Irish football fans could celebrate Premier League heroes, let alone title-winning heroes.

As Per Mertesacker would say, this team has great automatisms and from the Irish perspective, the experience, silverware and confidence gleaned will be useful assets for upcoming qualification tournaments in the years to come.

So, as everyone cheers or bemoans the Man City/Liverpool title race, spare a thought for the Manchester City women’s team, who, though undefeated, have to form a guard of honour to commemorate the new generation of Arsenal heroes.

1 Cian Healy: ‘Realistically I got away with murder when I was younger’
2 Seán O’Brien: Anger over my parents’ break-up never left me
3 Barcelona president Josep Maria Bartomeu and board of directors resign
4 Gerry Thornley: Antoine Dupont and France look perfectly primed for Ireland visit
5 Johnny Sexton: ‘We just know we have to be a lot better in all areas on Saturday’
Real news has value SUBSCRIBE
Crossword Get access to over 6,000 interactive crosswords