With right tweaks, women’s game can rival hurling as a treasure in sporting world 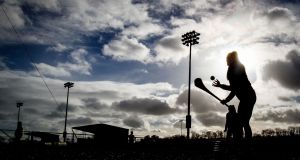 The Camogie Association needs to act now, embrace its differences and uniqueness and reshape the game for the modern era. Photograph: Oisín Keniry/Inpho

It was back in October during a series of interviews. Dublin camogie star Eve O’Brien was first up in a section where a number of players had to discuss where camogie stands.

It’s been a stellar year for women in sport, attendance records are being repeatedly broken, new role models have emerged, coverage feels like it has increased and all round the vibe is good when it comes to supporting women in sport.

In general, we have seen the greatest game of all time, hurling, earn global fame and Unesco status. Yet it has struck me as bizarre that while hurling is gaining worldwide attention, camogie manages to linger behind.

This, of course, is not down to the players, managers and teams. It is down to the game itself, how it is being treated and, in a way, being left by the wayside due to its own failings in moving with the times.

Referring back to O’ Brien, you could sense her frustration, and in every player really, who feel the rules and code of the sport need to catch up with the times.

Back in the day camogie was just 13-a-side with smaller goals and, even though you wanted to say that this was hurling, it was different. It was camogie, not to be confused with hurling.

Even on the main sponsor’s, Liberty Insurance’s, page it is curious to see how they describe the sport.

“Camogie is a fast and furious Irish stick-and-ball team field sport played by women. The origin of the word camogie is interesting. Men played hurling – a near identical game – using a curved stick called a camán. Women would use a shorter stick, at one stage described by the diminutive form, camóg.”

The desire to ensure that camogie remains a separate entity to hurling is, in my opinion, killing the game.

We even see how less physical the game is becoming just because the players are not allowed to be physical. Sure, some referees leave it slide while others are more prone to be whistle-happy, but the general consensus is girls and women should not be allowed to hit each other because, you know, playing with wooden sticks is definitely dangerous enough.

Non-stop frees and a match centring around the best free-taker is genuinely not entertaining. If you see most women’s sport now, there’s a toughness to it, a bit of physicality to it.

AFLW has proved that there is an appetite to see tough tackles, big hits and hefty shoulders and even watching the Ice Hockey Women’s World Cup final between USA and Finland proved that physicality is a welcome and healthy addition to women’s sport.

It can be incredibly frustrating how, time and time again, these issues come up or how all of the players seem to be singing from the same hymn sheet.

The grandest stage of them all, All-Ireland finals, cannot and should not be overshadowed by a referee who is merely doing their job. Finals should not turn into dour spectacles and free-taking competitions. It has to be marketable and a show to gain more attention. And, no, a handpass goal isn’t exactly the most exciting and skilful thing to watch.

Some changes are happening, however.

As Littlewoods begin streaming more games, more people are tuning in to see what the female version of the greatest game has to offer. A good portion of the games are absolute crackers and new rivalries are being created as teams get more competitive. The future can be bright for camogie.

Cork, Kilkenny, Galway, Dublin, Tipperary and the likes of Waterford and Clare are all testing the limits and playing unbelievable matches, yet it is incredibly disheartening when you hear the likes of Waterford’s Niamh Rockett and many more saying if things don’t change, then there may not be any more camogie in years to come.

The change has to come quickly, and it has to be impactful. The game is crying out for something new and ,unlike other sports, camogie cannot survive if the crowds get up off their seats and leave.

The Camogie Association needs to act now, embrace its differences and uniqueness, but also transition into something that can rival hurling as the greatest and fastest field game in the world.