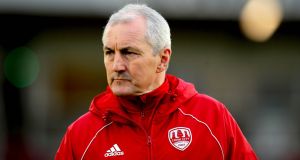 Cork City have confirmed the departure of manager John Caulfield after a little more than five years in charge at Turner’s Cross, during which time he won a number of trophies including, in 2017, a league and FAI Cup double.

Caulfield and the club are said to have reached a “mutual agreement” at a meeting in Bishopstown on Wednesday morning.

The club finished second in the league last year and reached a fourth successive cup final, but after losing players in the close season Caulfield’s attempt to rebuild the team did not yield anything like the desired results, and he departs following a desperately poor run of results.

“Everyone at the club is hugely grateful for everything John Caulfield has done for the club, the city and Cork,” said chairman Declan Carey in a statement confirming Caulfield’s departure. “He holds every record as a player and a manager. He leaves the club with all of our best wishes and we look forward to welcoming John to Turner’s Cross in the future.”

Caulfield is quoted as saying that he feels “the time is right to part ways with the club,” and the 54-year-old thanked everyone who has contributed to the team’s success in recent seasons.

Notably, perhaps, the supporters do not get a mention and the former striker had always given the impression he did not think he would be given much time to put things right again in the event that the results stopped coming - due to the pressure supporters exert on the board of a club that is effectively run by their representatives.

Though City’s current position - eighth in the Premier Division with just three points taken since the 2-0 defeat of Bohemians on March 15th - is clearly a huge disappointment, he is bound to feel somewhat aggrieved after all that has been achieved during his time back at the club.

In addition to managing the first team, Caulfield is said by many around City to have played a key role in developing other aspects of the club, not least a youth development system that has produced a number of strong underage sides and a number of very promising young players.

As attendances dropped through that winless run of eight league games, during which City scored only four goals, his position inevitably became the subject of mounting speculation.

Qualifying for Europe remains an important target for City this year as does progressing in this year’s Europa League. The club says it will make an announcement with regard to an interim manager over the coming days.