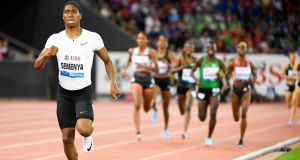 When the IAAF was founded in 1912, at the close of the Stockholm Olympics, the aim and purpose was to properly govern and protect the sport of athletics, to set the rules and regulations by which all athletes would adhere to.

In the beginning women were in fact prohibited from taking part, only for that to slowly and then suddenly change over the years. Now 107 years later and one of the most controversial rules brought in to regulate the men’s and women’s category in the sport has been upheld by the Court of Arbitration for Sport (CAS).

It was never meant to become personal, only inevitably it did, once Caster Semenya challenged the IAAF ruling that required female athletes with Differences of Sex Development (DSD) to conform to a lower testosterone level, if they wished to compete in the women’s category in distances ranging from 400m to the mile. The aim and purpose here was to create a more level playing field for women in those distances.

The regulations, due to be implemented in November 2018, were suspended when Semenya challenged the IAAF, claiming the new regulations would be discriminatory to her and other female athletes with DSDs. Again, the aim and purpose was to be fair to all women, and not let athletes born with DSDs to rule the sport as they have been for the past number of years, since the original rule was suspended in 2015.

Through no fault of her own, Semenya had become the face of the problem faced by the IAAF, and their two distinct categories male and female in the sport. It was never meant to single out Semenya either, only she has always been at the centre of the debate because she has been so dominant over 800m, the event that is most affected by athletes with DSDs.

The fact is Semenya is not the only athlete that will be required to conform to the new rules, yet she is the name that makes the headlines and so the debate always seems to centre around one athlete and the IAAF.

In reality the new regulations are there to protect the sport and all the women that aspire to run and maybe one day compete in a World or Olympic final. These events are governed by the IAAF, and as a result if an athlete wishes to participate in an IAAF sanctioned event then they are required to conform to the rules. This is just one rule that has been created to ensure a more fair and level playing field for all women.

Athletics is a simple sport; the results are invariably defined by the best result, the faster, the higher, the strongest. It is one of the few sports where men and women, even while competing in separate categories, compete in the same stadium, at the same time, in front of the same audience.

Even in more modern times athletics is still one of the few sports where female athletes are treated equally and given the same respect as male athletes. It is accepted that women don’t achieve the same speed, height or distance as men at the highest level, but this does not lower the interest in female athletics competitions. A competitive race can be just as exciting whether it is men or women running around the athletics track.

The women’s 800m has been dominated by three athletes in recent years: Semenya, Francine Niyonsaba from Burundi, and Margaret Wambui from Kenya. This is not normal domination but a markedly greater advantage shown in each race that is beyond a level that a non-DSD female athlete can compete fairly with. The race is decided before it begins, and over time it became more obvious that there was some anomaly and that something had to be done to preserve female sport and competition under IAAF rules.

Whenever there is a change to any rule or regulation, there will be those in favour and those opposed: it can take time to accept and adapt to the changes. It’s already taken the best part of a decade to get to this point where a rule has been defined and proposed, challenged and still standing.

There is still some way to go in understanding exactly how the rule will be implemented. This was acknowledged in the CAS decision, including the difficulties of implementation of the DSD regulations. Will all female athletes be required to have a testosterone level test to ensure they are below the naturally occurring limit now allowed of 5nmol/L?

There are also concerns regarding the required lowering of testosterone levels by DSD athletes, and if this is the best solution, as the implications of taking medication can have profound effects mentally and physically on any person beyond the primary purpose of taking any medication. This may be the one thing that needs addressing in another manner by the IAAF: can they be encouraging taking drugs to be compliant, yet still be primarily about discouraging drug taking in sport?

It may be that a separate category will ultimately evolve to allow athletes that are affected to continue to compete and enjoy their sport, alongside the traditional male and female categories that are the pillars of our sport.

In my opinion it is a positive decision, made to safeguard the future of women in sport, to promote fair and meaningful competition within the female category of athletics. There are still those concerns from the CAS panel on the implementation of the DSD regulations that the IAAF will need to iron out and work through as the rule is implemented over time.

My other concern is the events that are highlighted are just 400m up to the mile: Semenya is already trying out the 5,000m where she recently won the South African Championships. It seems short-sighted to limit the events: all things being equal, a female athlete who lines up in a marathon may still be at some disadvantage against an athlete with higher levels of testosterone, as long as they are also lean and doing the appropriate training.

If Semenya flaunts the rules and steps up to the 5,000m, and suddenly proves as competitive internationally, you have to ask why not just draw a line through all female events while the iron is hot, and be definitive and decisive across the board in the definition of female track and field events and those female athletes that fit the category.

I don’t believe we have crossed the finish line yet on a conclusive solution. So why leave the door ajar? The lines can be drawn now, when people are starting to accept the bigger picture, and what this means for the future of women’s participation, not just in athletics, but across all sports.