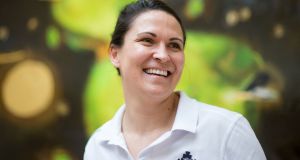 Tania Rosser: “I’d love to get touch into primary schools here. It’s a great way for girls to get into sport, and maybe transition into rugby later.” Photograph: James Crombie/Inpho

If you’ve seen people running around a rugby field with an oval ball but yelling “touch” instead of barrelling into each other, then you’ve seen the growing sport of touch rugby in action. Next week over 100 Irish players take the green shirt to Malaysia for the Touch World Cup, with players who started at age 15 and 50 among them.

The Irish players tog out in men’s and mixed gender teams, with two teams carrying European Champions titles into this bigger arena. Some 116 national teams are registered for the World Cup, with Irish teams facing traditional rugby countries like Australia, New Zealand and Fiji, as well as ones from countries like Singapore.

Tania Rosser, who has already represented Ireland successfully in rugby and netball, is flying the flag again for her adopted country as both a player and a manager in this championship.

“Touch rugby was my first love growing up in New Zealand. I’d wanted to play rugby, but my dad never allowed me. So I convinced him to start a touch team for the rugby players’ wives, and I played on that. Touch is a great sport, it’s really fast, but you don’t get hit. At the Worlds you have open teams for people in their 20s and 30s, but you’ve over-45 and 50s as well. So there’s categories for everyone.”

Rosser travelled to Malaysia ahead of the Worlds with some of the Irish team so they could get used to the heat. Temperatures average 33 degrees this time of year, and it is something the players often refer to when talking about preparations.

Yet Rosser says the five Irish teams have been playing together for over two years now, so they are as ready as they can be. She togs out with the mixed-30s team which includes Lynne Cantwell, Sene Naoupu and Emer O’ Malley.

“We’re lucky in the Irish set-up that we’ve made efforts to get the women playing – that’s our strength. That showed in the last Europeans. In the Irish team we expect the ladies to be play-makers – they really shine and can manipulate the defence. I think a lot of the male defenders underestimate us. We’re lucky the set-up is like that.”

Rosser explains this is also common on the Australian and New Zealand touch teams, but not so much among other European teams. Women are often put on the wing, with less input to decision-making.

Co-coaching with Billy Ngawini, Rosser has high hopes for the tournament. She points out that touch rugby is taken so seriously in Australia that school scholarships are offered in the same way as for Rugby Union or Rugby League. It’s a different playing field, but the Irish teams have their own goals.

“I’d love to see our team make it through the playoffs. It’s a big ask, the heat is tough out here, that will affect our guys. It’s hot and humid. We’re down to play Australia and New Zealand on the first day,” Rosser says.

“I’m pretty optimistic. We know some of the teams like France and England. We know New Zealand and Australia are the favourites, they’re usually in pretty much every final, but it should be really good”.

And with an eye to the future, Rosser and some of the other coaches are looking to bring touch rugby into Irish schools.

“I’d love to get touch into primary schools here. It’s a great way for girls to get into sport, and maybe transition into rugby later. They learn the tactics, about evasion, and could transition over when they’re more confident.”

That confidence would come from playing in a highly-structured environment with fear of injury taken away by the strict rules. Fast-paced with just six players per team, it is a minimal contact sport. Some sports bodies recommend the “touch” be to the arm or shoulder, but it can be anywhere, even a trailing shirt-end.

Possession of the ball changes after six touches. The player touched must place the ball on the ground when tapped, and step over the ball to allow for the restart. Kicking is out, but rugby rules like lateral passes and try-scoring apply.

However team manager Davinia Murray says touch rugby isn’t just for former rugby players, and she is hoping a good showing in Malaysia will bring more younger players on board. Currently about 500 people play with clubs listed on the website for Leinster, Connaught and Northern Ireland.

“It’s open to everyone. You can start at a young age and go on to be successful, and we’ve had people start at 50 and get a cap.”

And in that way smaller sports have of pulling everything in your life together, Murray works at Harvey Norman and was instrumental in getting the company on board as a sponsor. The company usually focuses on women’s sports, but Murray convinced it the Irish team’s backing for women and younger girls was enough.

One of those young players is Ellie Boyce, vice-captain of the mixed open team. She and a school-friend started playing at 15 with their local team in Stepaside, Dublin, back in 2013. It was a bit of a trial by fire as there were no under-age teams at the time, and Boyce was up to 20 years younger than some of her new team-mates.

“We were thrown in at the deep end. I’d been playing tag rugby since I was eight, so I had the basic ball skills and I was really into rugby. And about a month after we started, someone told us they were doing trials for the first women’s teams so we went for that too.”

It took about a year for her love of touch rugby to really blossom, something she puts down to the formation of under age teams. “I would’ve preferred from the start to play with people my own age, you make friends that way, you’re all on the same wavelength. But I learned fast.”

Boyce says the speed and structure of touch rugby is what keeps fans and players coming back. The game flies along so quickly substitutions can be made every 90 seconds.

“There’s more structure to touch than with a game of tag – it’s really fast-paced and tactical. You’re trying to set up the next play all the time. It’s a great game, but no one in Ireland knows too much about it yet. Some of my friends even call it tag, though I’d never ever say that to them,” Boyce says.

She says her childhood playing tag rugby did help her get onto the Irish touch rugby squads at an unusually young age. Her first year on the team was spent shuttling between Junior Cert classes at school and squad training in Athlone. Not your typical preparation.

Boyce has played with Donnybrook Touch for the last three years, and says between games, club training and Irish squad training she is on the pitch four days a week. Like Rosser, she also played another sport, with hockey for Avoca HC on her timetable until last year when something had to be dropped.

That something was never going to be touch rugby. Now preparing for Malaysia, she says: “This is my first World Cup. I’m really looking forward to playing New Zealand. I think I’ll learn so much, playing and seeing what they can do. I’m really excited to see how we well we will do.”