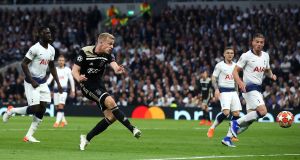 With 15 minutes gone at the Tottenham Hotspur Stadium there was a moment where the air seemed to disappear out of the ground, sucked up past the roofline into that gentle powder blue.

Ajax had just produced a startlingly smooth piece of football, midfield and attack functioning like limbs joined to the same shared brain. Hakim Ziyech provided the ignition with a lovely flighted pass out to David Neres on the left. Another slick cross-field pass from Lasse Schöne took it back to Ziyech.

From there the ball was laid into the feet of Donny van de Beek, who was irresistible in those opening 20 minutes, a player running undiscovered patterns, finding strange angles, spaces that shouldn’t be there.

Van de Beek let the ball run across his body, leaving Danny Rose scrabbling the wrong side, and opening up a route to goal. Spurs had been filleted in five swift strokes of the blade.

Then came the moment of stillness as Van de Beek did something unexpected: he paused. Then he shimmied, looked up and passed the ball into the corner of the net before veering away in joy towards his teammates.

Scrolling back over that moment, scratching one’s head at the vision and movement, it turned out Van de Beek had started the move too, spinning away from two players and giving the ball to Ziyech.

A few minutes later he did something similarly outrageous to the right side of the Spurs defence, gouging out a pocket of space by basically running away from the ball, then turning into the grass behind for the return from Dusan Tadic.

A 2-0 lead then would have been a killer in more ways than one. An early away goal is always a setback. But Spurs were being pulled apart in that early period, bystanders at an exhibition of the most finely wrought, gently merciless attacking football.

Davinson Sánchez may have had more awkward, uncomfortable half-hours, but not many that would be safe to broadcast without a parental warning. For a while Victor Wanyama looked lost.

There was a moment where he tried to turn two different ways at once as the ball was diverted across him, legs running in opposite directions, like a man sawn in half.

And still they kept on coming. The strange thing about this Ajax team only seems strange until they’re in front of you doing it: and then you wonder why everyone else isn’t.

Under Erik ten Hag’s system at least four players are given freedom basically to make the game up, to run their own patterns, find the parts as they fall. Just imagine. Footballers being encouraged to think creatively, to manage themselves on the pitch. It’ll never catch on.

De Jong even runs a bit like Johan Cruyff, romping about with the same bandy-legged style. He stood wide on the left for a bit. He came to the right and intercepted, playing a little pass with the outside of his foot. At times like these it is like watching the head of football join in with the Under-12s, running the session in a courteous, understated way, the game’s designated grown-up.

In front of him Van de Beek was the real star of the night. He is the most Ajax of Ajax players, a 22-year-old funnelled through the club from early boyhood. Van de Beek has been schooled to occupy an interchangeable role, a roaming nine and half, a 10 and a quarter, in a team full of half-players, dual roles, footballers leaning across to fill two spaces.

Early on Van de Beek roved across the front line. He sniped in and robbed Sánchez, forcing a corner. This was unlikely to have been a chance manoeuvre. When Ajax played the Europa League final against Manchester United José Mourinho sent his players out to press Sánchez, with great success. They do not tend to throw things away in Amsterdam.

It is to Tottenham’s great credit that this depleted team came back from that half-hour of space-football. Even with Jan Vertonghen off the pitch after a disturbing head injury the white shirts rallied.

Moussa Sissoko came on for Vertonghen and was the chief influence in bringing that Ajax midfield to heel. Sissoko is a hugely calming presence these days.

For a while he passed short and closed the spaces as Spurs managed to make this look more like a football match, a recognisable business of attack and defence.

It was an effort of will as much as anything else. If Ajax have a weakness it is on the counterattack, when that high press can be sprung. At times Spurs did stretch a defence where Matthijs de Ligt took the chance to show his poise and craft.

By the end it felt like a mile too far. These Spurs players started running in August and have not stopped since, even as bits have fallen off and muscles have begun to tie up.

Here they met something utterly distinct, a team of well-rested moving parts and in Van de Beek the outstanding presence on the night. Tottenham are still in this tie as they head to Amsterdam next Wednesday. But that sublime opening half-hour could yet prove decisive. - Guardian