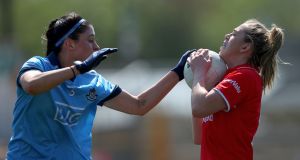 Galway will meet Cork in the 2019 Lidl Ladies National Football League Division One Final at Parnell Park on Sunday, May 5th.

Cork needed extra-time to end Dublin’s reign as league champions but 13 points from Orla Finn and an inspirational goal from Melissa Duggan got them over the line in Nowlan Park.

Goals from Niamh McEvoy after four minutes and Sinead Aherne with a penalty just before the interval put Dublin clear, but moments later Duggan hit the net and drew Cork level at half-time.

Cork raced four clear after the break, but the champions finally pegged them back when Nicole Owens landed the point of the game to force extra-time.

But Cork had more in reserve, and despite losing Áine O’Sullivan to a red card for dissent, they kicked on to the win, with Finn and Duggan kicking key points.

Elsewhere, on Saturday Galway showed they are big challenger to Cork in the race for silverware with their comprehensive victory over Donegal.

Megan Glynn found the net for Galway shortly after half-time, but the Tim Rabbitte’s side had already put in the groundwork for victory by that stage. Louise Ward, Róisín Leonard and Mairéad Seoighe got them up and running and despite Niamh Hegarty’s levelling penalty, Galway kicked on to a convincing win.

Meanwhile, the Division Two decider, which will also be played on Sunday May 5th, will feature Kerry and Waterford.

Louise Ní Mhuircheartaigh fired 1-6 for Kerry and Miriam O’Keeffe also nit the net against an injury-hit Armagh side, who couldn’t rediscover the form that saw them top the division.

In the other Division Two semi-final, Michelle Ryan scored a hat-trick of goals as Waterford qualified for the final with a convincing show against Cavan. A devastating nine-minute spell saw Waterford score four goals in the final quarter as they turned a one-point lead into a 13-point win.

For Meath, Stacey Grimes and Vicki Wall scored two goals each, while brilliant youngster Emma Duggan inspired them to a 14-point win over Longford to secure their place in the final for a second straight year.

In Division Four, Antrim needed extra-time to edge past Louth in their semi-final in Clones. Goals from Niamh Rice and Lauren Boyle looked to have sealed Louth’s progress, but Antrim’s Cathy Carey goaled in the game’s dying minutes and sent the game into extra time, where Ciara Durnein’s goal wrapped up a six-point win.

Fermanagh had Eimear Smyth to thank for their win as her 1-12 tally got them past four-goal Limerick in Coralstown. Joanne Donnan fired an early goal for Fermanagh, and despite Cathy Mee and Mairéad Kavanagh both scoring twice, Smyth finished the job for Fermanagh who had two points to spare.

George Ford and England wary of possible Welsh backlash 06:00
Ian O’Riordan: Debate on return of competitive running starts fast and stays hot 06:00
Ireland out to put things right against Georgia side trying to make a point 06:00
It’s good to have Richie Hogan back, he was missed 06:00
David Humphreys: Georgia simply can't be dropped in at the deep end 06:00
Crossword Get access to over 6,000 interactive crosswords