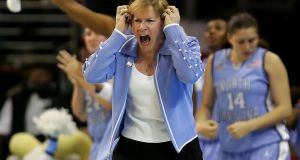 Coach Sylvia Hatchell: according to several witnesses she regularly put the health of individual players at risk, forcing them to play and to train when battling torn labrums, torn knee tendons and even a broken hand. Photograph: Jim McIsaac/Getty Images

After a mediocre display against Howard University last December, the University of North Carolina women’s basketball team coach warned her squad that another lacklustre performance in the next game might have grave consequences.

Many of the players in that locker-room were African-American, and she later apologised for her threat. Twice. The second mea culpa was thought necessary because the squad felt the first lacked sincerity. Although the coach’s legal representative now disputes the exact wording of the story.

“She said, ‘they’re going to take a rope and string us up, and hang us out to dry’,” said Hatchell’s lawyer Wade M Smith. “There is not a racist bone in her body.”

When your lawyer is arguing semantics and linguistic choices (eyewitnesses are adamant she used the words tree and noose) you’ve already lost, especially when you are in North Carolina. Here is a state with a long, sordid history of African-Americans being lynched in ceremonies that were often community celebrations, promoted by the local newspapers.

Indeed, elsewhere at the college there is a group of scholars currently working on an investigative project called “A Red Record” that is trying to map exactly where and when every black man or woman was hung in these parts between the years 1870 and 1960.

The sort of social and historical context that explains why another UNC player reportedly started crying when Hatchell denounced her charges for playing like “old mules” following a loss. That term is racially charged because on the plantations in the Antebellum South it was used to describe slaves who had outlived their economic usefulness.

When these allegations first came to light in the Washington Post, Hatchell and her assistant coaches were placed on administrative leave pending an internal review. After an investigation determined she was racially insensitive but not racist, she resigned last week.

“It has been the great honour and privilege of my life to coach at the University of North Carolina,” said Hatchell in a statement that didn’t address the allegations against her. “The game of basketball has given me so much but now it is time for me to step away.”

Over the course of 33 years at Chapel Hill, the 67-year-old punched her ticket to the sport’s Hall of Fame by leading UNC to 23 NCAA tournament appearances, three Final Fours and one national title, with a 1994 squad that included a teenage Marion Jones (remember her!)

Factoring in games at other universities, she finished with 1,023 wins, a tally that ranks her third all-time. Once gaudy statistics, they look a lot less impressive given the tenor of the claims made about her regime by 11 past and present players and their parents. These allegations extend beyond the charges of racism.

“We’ve all learned we need to go outside UNC in order to learn what’s actually wrong with our child,” one player’s mother told the Washington Post when explaining how injuries were constantly downplayed and misdiagnosed under the regime.

According to several witnesses, Hatchell regularly put the health of individual players at risk, forcing them to play and to train when battling torn labrums, torn knee tendons and even a broken hand. She encouraged them to avoid medically necessary procedures, and cultivated a hostile environment where injured women were regarded as lacking the required commitment.

“Get them out of my sight, they make me sick,” she roared at one of her assistants, demanding that those unable to take the court be removed from the gym during one session.

Hatchell is so old-school that her first coaching gig was looking after a team of 12- and 13-year-olds who were playing six a side, a modified variation of the sport that was then supposed to better suit the less athletic of the genders. Although the female game changed and her star rose with it, she appears to have remained caught in a coaching time warp where ruling by fear and loathing is still regarded as a legitimate approach.

Her case has highlighted yet again the toxic culture of college sport in America, a place where too many clipboard-wielding ayatollahs continue to wield too much power.

Decades after Indiana University’s Bobby Knight infamously placed a box of sanitary napkins in a player’s locker to mock his masculinity, there remains a coterie of martinet coaches who have been in charge at institutions for so long that they very often think themselves above the law.

Witness Hatchell questioning the toughness of amateur athletes on scholarships that make them little more than indentured servants during their time on campus. Meanwhile, her base salary was $400,000. A tidy sum supplemented by the plentiful additional earning opportunities that come from the profile afforded by being in charge at UNC.

There’s her publishing revenue for starters. She’s co-author of a number of books, including an account of her battle with leukaemia some years ago, Fight! “Fight! Discovering Your Inner Strength When Blindsided by Life”, and a tome called “The Baffled Parent’s Guide to Coaching Basketball”.

Then there’s her magnum opus, “The Complete Guide to Coaching Girls’ Basketball: Building a Great Team the Carolina Way. ”

Building a great team the Carolina Way. Not as attractive a prospect as it once sounded.