Ireland beaten all ends up by England at Wembley 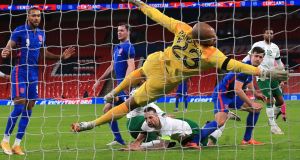 Stephen Kenny insisted beforehand that he had wanted this game; one he hoped would be a special occasion that might help his players to improve. As a side badly weakened again by unexpected absences were well beaten at Wembley, though, the Dubliner might have been forgiven for regretting the risk involved.

The stakes were pretty low, of course, but Irish supporters had been fond of their team’s long unbeaten run against England. Not only did that bite the dust here but it was the worst defeat suffered in the fixture since one in the World Cup qualifiers 63 years ago.

For Gareth Southgate, the night will go down as a welcome confidence builder both for a side beaten last month by Denmark and the couple of individuals who were handed international debuts. It is a little harder to gauge precisely what the benefits to the visitors were, but after so many games against ranked roughly around the same level, they were certainly reminded of the fact that a better one will punish the sort of defending they produced at times here. Harry Maguire, Jadon Sancho and, from the penalty spot, Dominic Calvert-Lewin got the goals that decided it and in truth, there could have been more.

Kenny’s day started to go wrong early. By lunchtime it had emerged that James McCarthy had left the squad for family reasons and when the team was announced it transpired that Seamus Coleman had been ruled out due to the recurrence of a thigh strain. Within a quarter of an hour John Egan was gone too, having clattered into Conor Hourihane under an early Mason Mount corner and never quite recovered.

Mount was only getting started with the corners. There had been 10 of them by the break and Ireland’s inability to fully deal with the problems they posed contributed to both of the first half goals they conceded.

Each was initially cleared and Ireland had the opportunity on both occasions to more fully get the ball away. But Matt Doherty and Cyrus Christie both sent headers in the direction of Harry Winks just outside the area and he made the defenders pay, floating the ball in after 18 minutes for Harry Maguire to head home, moving it sideways after 30 to Jack Grealish who fed Sancho who stepped inside before finding the bottom far corner.

Among the frustrations Kenny had to contend with was Shane Duffy’s inability at key moments around set pieces to handle Maguire and the absolute ease with which the Manchester United defender marshalled Adam Idah at the other end.

In fairness, the 19 year-old was given very little to work with and repeatedly found himself having to drop terribly deep in order to get involved at all but on the few occasions he was given something to chase he struggled with Maguire that little smarter in terms of his movement and stronger.

When Daryl Horgan did really well after a fine Jeff Hendrick ball over the England defence into some space inside the area early on, the striker wasn’t quite tuned in quickly enough to the opportunity that was unfolding before him. It would be the closing stages, when Alan Browne and Ronan Curtis got in shots and Duffy headed over before the visitors had a chance anywhere near as clear cut again.

Had Ireland put one of them away, it would have flattered them. England’s 3-4-3 formation is regarded as a work in progress with the concern being that it leaves them vulnerable in central midfield but they dominated in that department. Kenny’s side should have outnumbered them but it rarely looked that way, at least after the first England goal.

Inevitably, it was hard not to look at Grealish and wonder, from an Irish perspective, what might have been. The 25 year-old is struggling to get into Southgate’s team on anything like a regular basis but this, his third appearance will have done him no harm.

As he drifted about in front of the Irish defence he helped to open up space all around him and the control he exerted over the tempo and direction of the English attack caused the Irish back four difficulties until he departed an hour in.

Several of England’s substitutions actually made them stronger but Southgate will have been pleased to get 17 year-old Jude Bellingham involved for the first time and the teenager came through the closing stages rather comfortably.

This was Ireland’s best spell. Jayson Molumby impressed again and there were finally a few half chances to reflect on but in truth, the home side was coasting having gone three up after Christie clipped Bukayo Saka just inside the area.

Ronan Curtis’s shot from 25 yards was the only occasion on which the English goalkeeper, Dean Henderson by then, had to make what might be described as an actual save but as at the start, Ireland were at least retaining possession with some real composure again.

Not for the first time under Kenny the positives are the way the team passed the ball and the apparent ability of young players who have had very little first team football at club level to make the step up. And once again the manager has been hugely unfortunate with the number of important players he was without.

The problems persist, though, and whatever about Wales away, he could certainly do with beating Bulgaria next week to lift the mood going into the Christmas break.