Having failed to win any of his six games in charge, manager faces a challenging transitional period 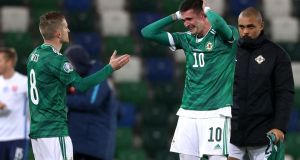 Ian Baraclough was at his lowest ebb but managerial duties demanded he put aside personal anguish for the greater good following Northern Ireland’s play-off final defeat to Slovakia.

“They came so close to getting to the World Cup two years ago and now so close to getting to a second consecutive Euros,” he said in the aftermath of a physically and mentally exhausting extra-time loss at Windsor Park. “There’s no reason why we can’t go again for the next campaign. Everyone would love to go to a World Cup and there’s no reason why those players can’t go again.” It is not a contrary reaction to Thursday’s missed opportunity to suggest there are, in fact, several reasons the squad that restored pride and hope on the international stage might not be equipped to go so close again.

Baraclough had to sound an upbeat note after Northern Ireland’s exit. His team must gather themselves for a Nations League game away in Austria on Sunday for a start. That alone is a formidable task after 120 minutes against Slovakia left Northern Ireland demoralised – “The worst I’ve felt after a game,” as the manager said – and depleted. Momentum was on their side after the 87th-minute equaliser but interrupted in extra time by injuries to Craig Cathcart and the influential Paddy McNair. Stuart Dallas played on with a damaged arm from the first half while captain Steven Davis also pulled up in the dying seconds. George Saville left the squad on Friday for personal reasons.

But absentees and a quick turnaround for a game Northern Ireland could do without against the group leaders are the least of the manager’s concerns. He sought to look ahead to qualification for Qatar 2022 on Thursday but the overriding feeling at Windsor Park was of the end of an era.

The ambition had been a second successive appearance at a European Championship finals. The cold reality was a second successive defeat in a play-off for a major tournament, three years to the day since the controversial exit against Switzerland in the 2018 World Cup qualifying campaign. Asking the spine of that team to go again is not simply a question of motivation.

Davis will be 36 when the World Cup qualifiers commence next March. The midfielder has been unable to exert the same authority on the pitch as throughout the 2016 and 2018 campaigns, unsurprisingly, but remains an undisputed first choice for Baraclough. The perennial problem for Northern Ireland of a small talent pool is underlined by the lack of competition – with or without top-flight experience – for a veteran with a record 123 caps for his country.

It is not an issue confined to the central midfield. Jonny Evans will be 33 next March, the same age as Niall McGinn and Kyle Lafferty. The centre-forward had insisted on playing one week after the death of his 41-year-old sister. “My best friend,” Lafferty said. “If I missed this game I would be letting Sonia down. It’s the right place to be.” The hero of the Euro 2016 qualifiers had a greater impact after his 77th-minute introduction against Slovakia than any other forward available to the Northern Ireland manager. The team needs a player with Lafferty’s hold-up and link-up strengths and is often ineffective without them, as five goals in the past eight games attests.

The team that grew up together under Michael O’Neill is approaching the exit together under his successor, who has been unable to arrest a steady decline in results in his six matches so far. The penalty shootout success against Bosnia-Herzegovina in the play-off semi-final is Northern Ireland’s only win in the past eight games. Penalty shootouts excluded, they have not won a competitive game since the Euro qualifier in Belarus 17 months ago and sit bottom of their Nations League group with one point from four games.

A challenging and lengthy transitional period beckons for Baraclough, Northern Ireland’s former under-21s manager, who has fresh options available such as Manchester United’s 19-year-old midfielder Ethan Galbraith but precious few with the seasoned experience of Davis, Evans, Lafferty or McGinn. He has every reason to ask them for one more shot at a World Cup, although Qatar appears a long one the morning after the arduous night before. – Guardian

1 Jacob Stockdale back in Ireland squad ahead of Scotland clash