Ireland finish off under-21 campaign with win over Luxembourg 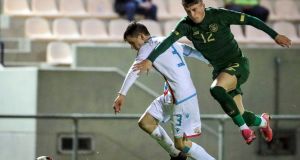 Ireland’s Daniel Grant in action against Henri Dunant of Luxembourg during the Uefa under-21 European Championship qualifier in Beggen. Photograph: Inpho/PressinPhoto

Luxembourg U21 1 Republic of Ireland 2

Substitute Jamie Lennon struck what proved to be the winner for the Republic of Ireland in Luxembourg on Wednesday to ensure Jim Crawford’s side finished their Euro qualifiers in third spot.

The St Patrick’s Athletic midfielder was only drafted into the squad for the final double-header of the campaign after Jason Knight was plucked for senior duty by Stephen Kenny last week.

JJ Kayode marked his first under-21 start by giving Ireland a 35th-minute lead in Beggen before Lennon came off the bench to extend the advantage on 65 minutes.

Kenan Avdusinovic reduced the arrears for the minnows with six minutes left but the dismissal of their captain Seid Korac in stoppage time ended any slim prospect of the comeback being completed.

Ireland knew after Sunday’s 2-1 defeat that qualification was beyond them, prompting Crawford to make six changes.

Nine of the starters will have played their final international unless they can progress into the senior ranks. Lennon was one of those now too old for underage action but Crawford is delighted he bowed out on a high.

“Jamie has done really well for St Pat’s in the last few weeks,” noted Crawford. “I’ve spoken to his manager Stephen O’Donnell about how much we rate him and, after initially coming in to just train with us, he earned his call-up.”

Luxembourg, with just one win from their previous nine qualifiers, were well organised, determined but lacking quality throughout their armoury.

It took a pinpoint cross by Darragh Leahy for Kayode to break their resistance with a bullet header.

Leahy smashed a rasping shot wide on 53 minutes before fellow League of Ireland representative Lennon finished at the back post 10 minutes later, only to be adjudged offside.

Lennon, on at half-time for the injured Thomas O’Connor, wouldn’t be denied 12 minutes later.

A deft flick-on by debutant Mark McGuinness from Danny Mandroiu’s free-kick fell to Lennon who rifled a 12-yard shot on the turn beneath Joao Machado.

Ireland were denied a third with 17 minutes left when Leahy’s shot was taken off the line by Leon Schmit and Avdusinovic made it a nervous finale by rocketing a 25-yard shot in off the underside of the crossbar.

“Apart from the worldie of a goal they scored, we were hardly troubled by Luxembourg.

“Winning was a nice way to cap off the campaign and I felt we fully deserved the three points.”