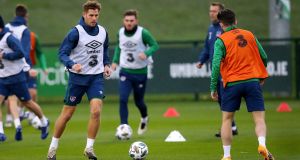 James Collins could lead the line for Ireland against Bulgaria. Photograph: Ryan Byrne/Inpho

Kick-off: 7.45pm, Wednesday. Venue: Aviva Stadium. How to follow: The Irish Times liveblog will begin at 7.15pm. On TV: Live on Sky Sports.

Overseeing a last ditch attempt to stave off relegation to the third tier of the Nations League by getting a result in a clash between two sides ravaged by injury, coronavirus and suspensions is probably not how Stephen Kenny had hoped his first calendar year in senior international management was going to end. But there you go; Wednesday’s game against Bulgaria is a bit of a cup final for the Dubliner alright, just not one he actually would have wanted to be involved with.

The pre-match absentee count has the hosts ahead by 16 to 10, not all of them Covid-19 related, although there are surely enough on that score to have prompted many people to ask whether it is entirely wise that we are still doing this sort of thing in the middle of a pandemic.

When your goalkeeping coach feels the need to make way for safety reasons then it certainly seems reasonable to raise the matter. The counter arguments are strong but as Conor Hourihane admits, games like this taking place in empty stadiums is all a little “dispiriting”. And that’s before we get to the two team’s recent run of results.

Ireland come into the game, as well all know well at this stage, looking for a first win under their new manager with the team having scored just once in his first seven games. The visitors have lost six of eight this year with arguably their best result being the draw against Ireland in September. Their one win came courtesy of the friendly they arranged against Gibraltar last week while Kenny’s men were taking on England. The score was the same in both matches.

Neither side would, in short, have too much complaints in the event they are relegated were it not for the chaos in which they are having to play, but over which they clearly have so little control.

Kenny said on Tuesday he has “no issues,” with ’keeping coach Alan Kelly and the Ireland manager defended the collective effort made to minimise the impact of the virus on the squad over the course of the past couple of windows. He dismissed the suggestion that there may, in particular, have been some poor calls made in relation to the absence of “close contacts”, during this window given that additional players have then gone onto test positive.

He argued that the situation is full of “unknowables” which is fair enough, but his contention that the Irish squad has been no more seriously affected than those of other nations doesn’t quite stand up when it comes to a comparison with our near neighbours, and one suspects he might, privately, be asking a few questions about the protocols himself.

Bulgaria’s problems – they lost three players from Sunday’s starting line-up against Finland just before leaving for Dublin due to positive tests on top of what was already a long list of absentees – are a reminder, though, that Kenny’s plight is certainly not unique.

It does seem faintly ridiculous given all of this that there should be anything riding on the game but relegation would be regarded as something an embarrassment and the Irish manager could definitely do with lifting spirits ahead of the international game’s long close season.

With only five of the players who featured in the away game in the squad now, it is clearly likely to require others to take their opportunity to shine. Darren Randolph, Shane Duffy, Conor Hourihane and Robbie Brady all seem very likely to start – Callum O’Dowda is a doubt with a dead leg – but it could be a big night for a handful of players who would not have been expecting to feature in this game even a week or so ago.

Kenny was asked on Tuesday whether he has considered starting games with a second striker in order to give his side a better chance of putting away some of the opportunities being created. He hadn’t ruled it out, although there was nothing to suggest any radical rethinking of his formation either.

On the team’s better days, in truth, a lack of bodies inside the area hasn’t been the key problem; that has been the quality of the finishing and in the absence of Adam Idah, who has not looked entirely ready for what has been asked of him these past few games, it will be interesting to see how James Collins or, perhaps, one of the squad’s other strikers might rise to the occasion.

Winning by a couple of goals would prove very little in the circumstances and yet it might go a very long way towards improving the mood of the public, sections of which, on social media at least, seem inclined to completely disregard the remarkable context in which Kenny is having to operate. Even a draw, perhaps a score one might be best on this occasion, would be enough to keep Ireland up, and that would be something.

Either way, the manager insists he remains confident that with a full squad to choose from in the spring, one augmented by the players he has promoted in recent weeks, Ireland can make themselves a force to be reckoned with in 2021. Like a lot of people, Kenny can certainly be forgiven for thinking that next year simply cannot be any worse than the one now finally coming to an end.