If appeal is upheld, Harps could replace Shelbourne in relegation playoff against Longford 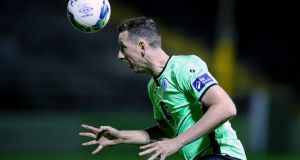 Waterford have lodged an appeal with the FAI over the decision to allow Shane McEleney play for Finn Harps in the final round of Premier Division games on Monday night. If successful, the move would have major ramifications at both ends of the table with Harps potentially replacing Shelbourne in the playoff game and Dundalk losing out, at least for the moment, on European football for next season.

The appeal focuses on a decision by the FAI’s Disciplinary Committee to allow McEleney participate in the game against Waterford despite the fact that he had been due to serve a one match suspension after picking up a fifth yellow card in the recent fixture against St Patrick’s Athletic.

The suspension was supposed to kick in on Monday and the final round of games was supposed to be played the previous day but after the meeting of Shamrock Rovers and Derry City had to be rescheduled because of cases of coronavirus at the Brandywell, last Sunday’s programme of five matches was put back 24 hours.

At that point, it seems, a decision was taken too to also defer the suspension by 24 hours and so McEleney was allowed to play for Harps against Waterford in Ballybofey. The home side won that game thanks to a first half goal by Adam Foley.

The effect of the result was to lift Harps above Shelbourne and Derry towards the bottom end of the table and so leave the Dublin club, who lost 2-0 on the night to Shamrock Rovers, in the playoff position. That game against Longford Town is currently scheduled for Sunday afternoon at 2.30pm in Richmond Park.

Had Waterford won at Finn Park, they would have overtaken Dundalk and finished third in the league and so guaranteed themselves European football for next season. The champions, who lost at home, would have dropped to fourth and been left needing to either win the FAI Cup or hope one of the teams above them in the league won it so that they would get back into Europe. Sligo Rovers are currently in that position but if the Waterford appeal is successful they would be relegated to fifth position in the table.

Waterford are understood to have lodged the appeal on Wednesday with the aim of having the result overturned and the game declared a 3-0 win for them, as is generally routine when an opposing club is found to have played an ineligible player.

Harps, however, are understood to believe they did nothing wrong as they appear to have been told by the association that McEleney could play. It is not yet clear when the appeal might be heard or whether it will affect the scheduling of Sunday’s playoff but Dundalk, Sligo Rovers and Shelbourne will all be eagerly awaiting clarification.