Former Ireland international to address gathering at the Mansion House 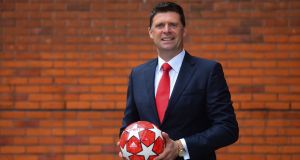 Niall Quinn: will outline his proposals to the ‘stakeholder forum’ gathering at the Mansion House on Friday. Photograph: Ramsey Cardy/Sportsfile

Whatever else comes out of Minister Shane Ross’s “stakeholder forum” at the Mansion House, Niall Quinn says that he will finally provide detail to the assembled guests on his group’s proposals for the future of the Irish game.

It is six months now since Quinn first flagged his hopes of bringing a fresh perspective to the organisation of the club game here and the funding of the sport as a whole.

However, the turmoil that has engulfed the FAI since has delayed the publication of any specific proposals, something that has fuelled the scepticism of those who were calling for the provision of specifics at any early stage.

Quinn was, at one stage, only a matter of days away from briefing the media about the detail of his plan and putting forward many of the individuals who have contributed to it. The crisis in the FAI persuaded the former Arsenal and Ireland striker to hold off.

With a couple of his key backers, Goodbody’s chief executive Roy Barrett and Kieran Foley, the former Galway United defender who is now involved in sports promotion in the United States, due to attend Friday’s Government-backed forum, it now appears that Quinn feels the time is right to fill some of the gaps in what is certainly a wide-ranging proposal.

“I’m happy to disclose information to the Minister and the other stakeholders on Friday,” said Quinn at a Virgin media event to promote the broadcaster’s coverage of the Europa and Champions League finals.

“The group are excited. The group is really happy that we have submitted what we think is a worthwhile proposal and a set of ideas to the governance review group.

“We’re looking forward to discussing those ideas with the Minister and the other stakeholders at the forum on Friday, where other ideas will be floated too.

“So we’re looking forward to the feedback on that and seeing where it’s all heading and if the governance review group are going to deliver the opportunity for meaningful change.”

For Quinn and his associates the landscape is presumably seen as being more promising now that it did at the start of the year when John Delaney’s continuing grip on things at the association meant anything coming from anyone he might perceive to be a threat was largely ignored.

Amid the current chaos, though, there are new challenges, not least identifying who might be making the key decisions on the future development of football in Ireland even six months from now.

A significant number of members of the current FAI board are said to be canvassing support to run again in July while there are many who believe Noel Mooney’s appointment may well end up being for longer than the initial six months. These are developments, however, that have clearly irritated Ross and only made the immediate restoration of Government funding to Abbotstown less likely.

The Minister made that much abundantly clear in a strongly worded article for the Sunday Independent over the weekend in which he accused the board of “backsliding” and described the appointment of Mooney as “backward”.

Quinn and co will have been encouraged, however, by Ross’s acknowledgement of the importance of football to the country as a whole with the Minister writing that: “The nation cares about soccer. We are proud of Irish footballers, their gallant performances, often winning in the face of overwhelming odds. We have seen travelling fans – proud to be Irish – behaving with dignity and good humour at matches overseas. They have been priceless ambassadors for our country. Soccer has lifted the nation.”

These are likely to be words that the group remind Ross of in the event that they ever get some form of official license to progress their plans. They are also likely to encourage the separate group currently seeking to drum support, financial and otherwise, for an all Ireland league, details of which are also expected to be announced in the coming weeks.

Whether those still actually in control of the association genuinely see this a moment for substantial change is far from clear, though. We may know at least a little more about that on Friday too.