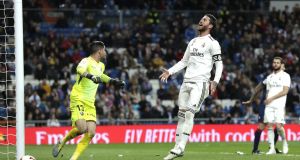 Real Madrid captain Sergio Ramos asked to leave to join a team in China on a free transfer, club president Florentino Perez has said, adding that he turned down the defender’s request.

“They (Ramos and his agent) came to see me in my office and told me they had a very good offer from China but the league rules over there wouldn’t permit them to pay the transfer fee,” Perez told radio station Onda Cero on Monday.

“What was I going to tell him? We said this couldn’t happen but we’d speak to the club to satisfy him but that Real Madrid could not afford to let its captain leave for free as that would set a terrible precedent for other players.”

The Spain defender, 33, is Madrid’s longest serving player and one of club’s most beloved players for his role in winning four Champions League titles, but he shouldered a lot of criticism for the team’s harrowing last campaign.

Ramos was found by Uefa to have intentionally got suspended for the second leg of Madrid’s Champions League last-16 tie with Ajax Amsterdam, which they lost 4-1 to exit the competition at the earliest stage since 2010.

Madrid also had one of their worst domestic campaigns in recent memory, finishing 19 points behind champions Barcelona and losing 12 league matches for the first time in 20 years, as well as being knocked out of the Copa del Rey by Barca.