Spanish players and officials held on suspicion of match-fixing 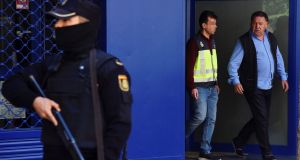 Huesca’s president Agustin Lasaosa (right) is escorted by a policeman after being arrested by Spanish National Police as part of an investigation of an alleged match fixing network in Spanish La Liga and La Liga 2. Photograph: Javier Blasco/EPA

Spanish police arrested several first- and second-division soccer players and officials on Tuesday on suspicion of forming a match-fixing group to profit from betting on games, the police said.

Operation Oikos involved nine raids across the country and an expected 11 arrests, the police said in a statement. La Liga, Spanish football’s governing body, said it had contacted the authorities about a possible illegal scheme and had worked with them on the operation.

“Among those to be detained are both active and retired players from the first division, players active in the second division and presidents and directors of a club,” the police said.

“The investigation has established that those under investigation came to arrangements with different players to ‘fix’ at least three games in the first, second and third divisions,” they said in the statement.

A lawyer for the club Huesca, recently demoted from the top-tier La Liga, confirmed that various people at the club had been detained on a warrant issued by a local court in the northeastern town.

A spokesman for La Liga said the police action followed a complaint it had made over a May 2018 match.

The police said that in the case of one second-division match, more than 14 times the usual amount of money was bet on a game in that league. It did not specify which teams were involved in the game.

National daily El Pais reported that the investigation began after Huesca’s 1-0 defeat to Nastic at the end of their 2017-18 season in the Segunda, or second division. Huesca had already won promotion to La Liga at the time of the match.

The lawyer for Huesca did not directly name those detained. But El Pais reported that they included club president Agustin Lasaosa as well as the head of the club’s medical department.

“We haven’t been able to speak to the president yet. However he will be able to give opportune explanations in due course,” the club lawyer, Pedro Camarero, told reporters at Huesca’s stadium.

“Internally within the club we are not worried and are at the disposal of whatever the courts request of us. For now, we do not know how things will develop,” he said.

Huesca recently finished second-last in La Liga and will be back in Segunda next season.

“We want to thank the National Police for the extraordinary work done to dismantle what appears to be an organised criminal group dedicated to obtaining economic benefits through the predetermination of football matches,” the La Liga spokesman said.