Flexible Emery and Arsenal have a blueprint for Europa success 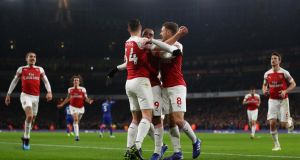 Transition is often a useful excuse for football clubs but in the case of Arsenal and Chelsea it happens to be true. The Europa League final will be a battle of two managers coming to the end of their first season at their respective clubs, both hamstrung by oddly imbalanced squads, and both charged with leading their sides into a bold new era.

Maurizio Sarri’s problem, though, is that all Chelsea’s existence since José Mourinho was first removed in 2006 has been transition.

They are a club who have thrived on conflict and chaos and only now seem to be suffering the effects of a lack of discernible long-term planning – and even then, despite the churn of discontent around Stamford Bridge, they have managed to finish third and reach two cup finals.

Sarri is a curiously still point amid the chaos. For him nothing ever changes – which has, in a sense, been part of the problem. In Baku it will be a 4-3-3, just as it has been every week, from Huddersfield to Leicester via Thessaloniki, Borisov and Frankfurt, even though that means squeezing square pegs into round holes and, given the injury to Ruben Loftus-Cheek, next to no goal threat from midfield. With N’Golo Kanté also out, there appear to be only two real personnel questions: Gonzalo Higuaín or Olivier Giroud at centre-forward and Pedro or Willian on the right.

For Sarri, the system is all, which is what makes it so bewildering that, having taken the decision to appoint him, Chelsea have given him so little opportunity to re-craft the squad in his image. The transfer ban means that, as things stand, there will be no chance of doing so this summer either, which perhaps adds to the argument to replace him, although without impinging on the fact that it makes no sense to appoint a manager like Sarri if there is not going to be complete buy-in.

In practice the disjunction between personnel and philosophy and the unfamiliarity of the players with the system has meant the football has often been ponderous, a far remove from the thrillingly quick style of Sarri’s Napoli. Arsenal exploited that comprehensively in the league meeting between the sides at the Emirates in January, winning by a very comfortable 2-0.

Unai Emery is far harder to read, in part because he is far more flexible than Sarri. He may have a basic belief in the benefits of pressing but he is not dogmatic about it and has been much more prepared to compromise as he looks to build on the relics of the Wenger era.

The outstanding feature of his career, in fact, has been his mastery of the Europa League and his ability to play the rhythms of two-leg ties, sitting deep and striking on the counter when required. Equally, although it is almost certain he would prefer to play some variant of 4-2-3-1, he has often this season operated with two central strikers to accommodate Pierre-Emerick Aubameyang and Alexandre Lacazette.

Both played in that game at the Emirates, which will probably provide the blueprint this time (Chelsea’s 3-2 win at Stamford Bridge on the opening weekend of the league season was so shambolic in the first half and so long ago in the development of both sides that it feels all but irrelevant here). Aaron Ramsey was effective at the tip of a midfield diamond in that game but his absence through injury is problematic. With Henrikh Mkhitaryan unable to travel, that creates a major issue. Mesut Özil offers guile but Emery has made it clear he feels he lacks Ramsey’s energy and defensive discipline. Nevertheless, he will probably start unless Alex Iwobi is used in an unfamiliar central role.

A deep-lying midfield three of Granit Xhaka flanked by Lucas Torreira and Matteo Guendouzi should at least be able to compete with Chelsea’s midfield but the problem with the diamond is always the channel left on the flanks. With Arsenal’s two full-backs likely to be occupied by Eden Hazard and Willian or Pedro, that presents an opportunity for César Azpilicueta and Marcos Alonso to advance, something that plays particularly into the hands of Alonso, who has registered four goals and five assists this season but has at times looked defensively suspect.

The one weapon Arsenal have against that is that both their front two have spent periods of their career operating in wide areas. Both will probably be encouraged to pull wide and look to exploit the space behind the full-back or, at the very least, make Azpilicueta and Alonso hesitate before pushing forward.

Neither side has exactly been mentally robust this season and there is every possibility that an early setback could send one careering off the rails. But beyond that the pattern is likely to be of Chelsea, if they can face down the sort of intense early press that in effect settled the game at the Emirates, dominating possession and Arsenal threatening behind the full-backs on the counter. - Guardian