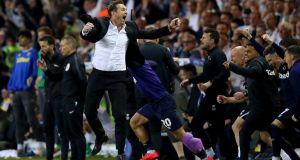 If you, like many people right now, are yearning for common courtesy, a sense of civility in these stricken times, then a word to the wise: don’t start with the official Leeds United Twitter account.

Leeds were knocked out of the Championship playoffs by Derby County a fortnight ago. Turned over 4-2 in their own backyard no less. You might have thought a period of humility and introspection would follow. Not so. Whoever runs the Leeds account has instead seen fit to use the time to cultivate a feud with Derby. And drag Niall Horan into it for good measure.

To go through the whole back and forth would not be an ideal use of your time or mine, but inhaling a brief whiff of the thing is useful as it gives a sense of what happens when formerly silent institutions develop a mouth and decide the best thing to do is to shoot it off.

To recap: Leeds got caught spying on Derby before the pair met in the Championship last year. They were then drawn against the same side in the playoffs. A goal up during the first leg at Pride Park, Leeds fans started singing about the spying and about how Leeds kept beating Derby and how their manager Frank Lampard should stop crying about it all. After his team won the tie at Elland Road, Lampard re-recorded the song, complete with boo-hoo hand gestures, and Derby posted it on their YouTube channel.

For his part, One Direction’s Horan, a Derby fan, then went on the radio to say that no one likes Leeds. And so, at 4.55pm on Monday, roughly 120 seconds after Derby had lost the playoff final to Aston Villa, the Leeds account quoted a tweet from Horan in which he boasted of playing at Wembley, and added the message: “Hopefully you performed better than @dcfcofficial! See you next season! #StopCrying.”

Now, I’m not saying the message is offensive. It’s probably most likely filed under “banter” (subfolder: the undiluted “terrace” kind). You could argue that it was all a bit unnecessary, and that it makes Leeds look petty and mean-spirited. But, at the same time, you could also shrug your shoulders, point at the engagement (the post garnered many more likes and shares than the account generally enjoys) and say “this is effective corporate social media, actually”.

Back in the mists of digital time – that is to say, 10 years ago – the world’s biggest sporting organisations were just discovering the communicative potential of platforms like Facebook and Twitter. Almost en masse, they leaped online to interact directly with their fans, promote short-lived marketing schemes and post public messages they assumed were private.

Other early instances of the form – from Saracens’ 2009 opener, which was written as if they had completely forgotten who they were (“Saracens have announced that Steve Borthwick will captain the London club for the new season”), to Tottenham’s first post a year later in which they posted inverted commas around their own nickname (“‘Daws’ called-up for World Cup”), show that while the instinct was there, organisations took baby steps in getting used to this new world.

To some extent, a straightforward transmission of information remains at the heart of what any company, or sporting organisation, hopes to achieve with social media. But there is also an extent to which it is irrelevant.

You don’t have to be Manchester United’s executive vice-chairman Ed Woodward attempting to put a shine on the Alexis Sanchez transfer by bigging up the number of likes it got on Instagram to believe that your future fanbase is to be found on social media. And if you do, you need to engage them on social media’s terms: ie with content that is sensational and provocative. Even the prospect of ‘Daws’ travelling to South Africa fails to clear that hurdle.

Recently, the account for sugar-replete soft drink Sunny Delight got a bit of traction for pretending it was depressed. “I can’t do this any more”, the beverage tweeted. The consensus was that this brave message had opened up new avenues of communication around mental health. Or that it was a tawdry, exploitative move. I can’t remember which to be honest, but it certainly got me talking.

As postmodern and tawdry as it might currently seem, I’d suggest the Sunny D model will come to seem prescient in years to come. It may not be sincere, it may be insensitive, but for a moment it makes an inanimate object appear alive. This is the goal all businesses and products aspire to, with sports clubs and competitions being no exception.

Whether the outcome will benefit society is a moot point, but the countdown to Wycombe Wanderers demanding a WTO Brexit on Twitter starts here. – Guardian