‘It feels right that Villa are in the Premier League, the history and the size of the club’ 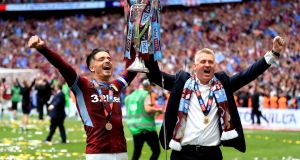 A mixture of euphoria and optimism swept through Aston Villa as Dean Smith claimed they are back where they belong after winning promotion to the Premier League, and Nassef Sawiris, the club’s co-owner, said the “sky is the limit” following victory in the Championship play-off final.

Anwar El Ghazi and John McGinn scored the goals that gave Villa a 2-1 victory over Derby, on a day when Prince William, who has always supported Villa, was hugging former player John Carew in the stands.

“I’d love to meet him and tell him you support the right club,” Smith said, when asked about the royal presence at Wembley.

Victory for Villa goes some way to making up for the disappointment of losing to Fulham at Wembley 12 months ago and ends a three-year absence from the Premier League.

It was a particularly special achievement for Smith, who grew up supporting Villa and revealed that when he last spoke to his father, who has dementia, he made him a promise he intended to keep.

“I went to see my old man on Friday and I managed to get his eyes open for two minutes maximum. I said: ‘Next time I come and see you, I’ll be a Premier League manager.’ He smiled and nodded. Hopefully there was an understanding but it’s a terrible illness. For me, that was enough.”

Smith, who admitted he felt emotional when he saw his wife and children crying in the royal box as he walked up to lift the trophy, is confident Villa will push on next season.

“It feels right that Villa are in the Premier League, the history and the size of the club, the fans it has – I believe it is a Premier League club and that’s not me being a supporter.

“But we’ve done some hard years trying to get back into the Premier League. We’ve fallen on hard times. Last season was very tough for everyone who went through defeat here against Fulham. They asked me to take on the job, it was two of Steve Bruce’s signings who scored the winning goals, so every credit to him. But we work very hard every day and the potential with the owners that we have is massive.”

Smith singled out Jack Grealish, Villa’s captain, for praise. “I’ve got a special connection with the lad, he’s a Villa fan, he’s been through a lot in his career so far. A lot of people’s perceptions of him are him lying in a road when he was 17 or 18. He was thrust into the limelight as a young kid, but, boy, the kid has matured. I had no qualms giving him the captaincy.”

While Villa can look forward to next season, Derby face a summer of upheaval. Frank Lampard, who could yet emerge as a managerial target for Chelsea, will hold talks with Mel Morris, Derby’s owner, to establish how they will approach another campaign in the Championship. Five key players are out of contract, while Harry Wilson, Mason Mount and Fikayo Tomori, who have all impressed on loan, will return to their parent clubs.

“I’ve had no conversations with any other clubs,” Lampard said. “I’m proud to work for this club, whatever the owner decides the financial position is, that is for me to work with. I’m not sitting here bemoaning it but it’s crucial to find out where we’re at, because we need to to plan for next season.”- Guardian

From purses to TV ratings: How Tiger Woods changed the face of golf 06:30
Long road to the top a fitting reward for dedicated McCarthy 06:00
Stephen Kenny finds replacement for Damien Duff on Ireland coaching staff 06:00
Colosseum will hold no fear for Test match animal Rónan Kelleher 06:00
Keith Duggan: Gerrard the saviour for blue half of Glasgow as he buries an old ghost 06:00