Harry Kane: ‘If the final was tomorrow, I would be fit to play’ 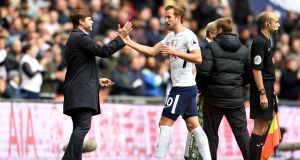 Harry Kane has made it plain he will be fit for the Champions League final against Liverpool on Saturday, going so far as to say if the game were tomorrow, he would be available.

The Tottenham striker’s fitness has been a major talking point since the ankle ligament injury he suffered in the first leg of the quarter-final against Manchester City on April 9th. It was the fifth time in three seasons Kane had damaged ankle ligaments. Previously, the England captain has been out for between three and seven weeks with the problems.

Kane returned to full training last Friday and, assuming all goes well, he hopes to be in Mauricio Pochettino’s starting XI for Madrid. The manager has so far given nothing away as to whether he intends to start with Kane. The player’s upbeat fitness bulletin also represents good news for England, who contest the inaugural Nations League finals, which begin on June 6th.

Kane said: “If the final was tomorrow, I would be fit to play. I feel good. I’m back [training] with the team and there have been no problems so far. I’ve been in full training, doing everything. I’m at a place now where I’m ready to go for any game. The manager will assess it and decide. But, so far, I feel good and ready.

“Having the three-week gap after the end of the [Premier League] season definitely helped. From when it happened, I could put a plan in place to be ready for this game. We’ve had longer than we had for the other ankle injuries and it’s worked out well. I’m in a good place.”

“We’ll probably have four weeks off in the off-season and in those weeks, it’s for me to do a lot of rehab, continue the process and not just switch off. When you look at the injuries, a lot of them have been contact, tackles. I’ve been unfortunate but, of course, when something happens four or five times, you always look to see if there are any improvements you can make.”

Kane gave an insight into the emotions he felt when he watched Spurs beat Manchester City in the quarter-final and Ajax in the semi-final – both on away goals. Spurs survived at City when Raheem Sterling had what stood to be a stoppage-time winner ruled out after VAR review while they edged through in Amsterdam after Lucas Moura’s 96th-minute goal.

“I watched the City game at home and when Raheem scored, one of my mates just left the room and all of a sudden we’re calling him back,” Kane said. “It was just crazy. I was in the directors’ bit for the Ajax game, surrounded by Ajax fans.

“Slowly, it started to change in the second half and right at the end I said to Davinson [Sanchez], let’s go down and be with the team. Then, all of a sudden, we scored and we jumped up and sprinted down the tunnel to be there when the game was over. It was an amazing experience.” – Guardian