Marcelo Bielsa to stay with Leeds for another season 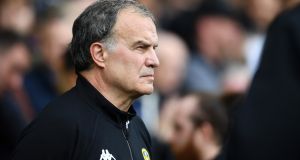 Leeds have announced manager Marcelo Bielsa will remain at the club for another season. Photograph: Clive Mason/Getty

Leeds have announced manager Marcelo Bielsa will remain at the club for another season.

Bielsa, 63, who guided Leeds to the play-offs in his first season, has agreed to stay at Elland Road after the Sky Bet Championship club activated their option to extend his deal for another 12 months.

“Leeds are delighted to confirm that chairman Andrea Radrizzani has officially exercised the option to extend Marcelo Bielsa’s contract for a second season,” read a statement on Leeds’ official website.

“Marcelo has met with the board of directors on a number of occasions over the past few days and has confirmed his intention to continue on in his role of head coach.”

Leeds fans had feared the former Chile and Argentina boss could leave the club following their defeat to Derby in the play-off semi-finals.

Bielsa said he would consider an offer to extend his stay immediately after his side’s 4-3 aggregate defeat, but gave no guarantees over his future.

Leeds added: “Bielsa penned a two-year deal with the Whites in June 2018 with the club maintaining the right to extend or terminate the deal at the end of year one.

“During Marcelo’s debut season in English football, the team amassed a total of 83 points — the highest points total since promotion from League One during the 2009-10 season, playing an attractive brand of football which has helped Bielsa to become a popular figure among supporters.”