Eden Hazard determined to finish his Chelsea career on a high 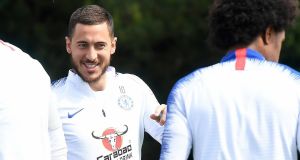 Eden Hazard, who is preparing for what is likely to be his final appearance after seven years at Chelsea, has ruled out playing for another English club and vowed to leave on a high by winning the Europa League.

A deal has yet to be agreed with suitors Real Madrid but, with Hazard having no interest in extending his contract beyond 2020, Chelsea will continue talks aimed at securing close to their £100m valuation for a player who could leave for nothing next summer. The 28-year-old had always pledged to depart with a trophy, and victory against Arsenal tomorrow would provide the perfect send-off.

“It is a European competition so for me, for the club, for the manager, for the fans, it is something important,” Hazard said.

“When you play a final it does not matter whether it is the Champions League, Europa League or League Cup: you just want to win . . . If it is my last game, I hope to bring the trophy.”

Hazard suggested he would speak about his future only when an agreement has been struck.

“At the moment, nothing has happened, so I can’t say anything. It’s in the hands of the clubs. But I can put it aside. I have done it during a full season right now, and I have played reasonably well. So I stay in that mode, just thinking about football. After the final, we will see.”

Hazard has won two Premier League titles, a League Cup and FA Cup, together with the 2013 Europa League during his time at Chelsea.

Asked whether he could ever turn out for another club in England, his response was emphatic.

“No chance, no chance,” he said. “I am a Blue! It means a lot to me. I cannot play for another club in this country. When you play for Chelsea, at the start of the season people look at which trophies we can have at the end of May. We lost the EFL Cup final two months ago so, at the end of the season, this is one we can go for. It’s important.”

Arsenal had been one of the options considered by Hazard in the summer of 2012 as he sought to move to the Premier League after excelling with Lille.

Tottenham, Manchester City and Manchester United also tabled an interest, and Arsène Wenger spoke with the player’s then agent, only for Hazard’s head to be turned following Chelsea’s triumph in the Champions League final in Munich.

“I think I made the right decision,” Hazard said. “I spoke with the owner [Roman Abramovich] and [the manager] Roberto Di Matteo, and we talked about football. I had Didier Drogba on the phone, and [his Lille teammate] Joe Cole told me about this club, that it was the best club for me.

“I was a bit scared when I came, because Didier left immediately and if you have Didier in the team you will win a trophy. But, in the end, I played with top players. If you look at my seven years at Chelsea, we did something amazing together. When I came here I was a baby. Now I am a big man.”

This season, statistically at least, has been Hazard’s best, though the player considers the displays that helped to propel Chelsea to the title under José Mourinho in 2015 as his finest at the club.

“I was more consistent that year,” he said. “For me, a good season is not whether I score 40 goals. I want to win something at the end of the season. I don’t think this has been my best season: it has been 50/50, sometimes happy, sometimes not. I think I can still improve.

“When you look at the starting XI Manchester City have, they can play any of 22 players. When you look at Chelsea, we can’t play with 22 players, so that is the difference. They also did not change the manager in the summer, while we did.

“But when you see the results, we finished in the top three of the Premier League, we reached the League Cup final and we reached the final of the Europa League. If we win that, the season can still be good.”

Meanwhile, Chelsea have not given up hope of N’Golo Kanté playing a part in the final, despite him missing training to have treatment on a knee injury. Kanté travelled to Baku with the squad yesterday and, while he remains a major doubt, his fitness will be closely monitored before a decision is made as to whether he plays. – Guardian