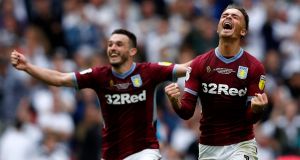 Aston Villa are back in the big time, £170 million (€192. 5million) richer and free from the demons that have tormented them since they lost in the playoff final 12 months ago. After three rollercoaster years in the Championship, Villa have managed to navigate a return to the Premier League and how fitting that Dean Smith, a lifelong supporter, was there at the helm to complete that journey.

There were wild scenes at the end, in the stands and on the pitch, as Prince William and John Carew jumped all over one another, and Jack Grealish and his team-mates celebrated in front of the Villa supporters.

Villa, in truth, handled the occasion far better than Derby and put themselves in a commanding position when John McGinn, capitalising on an error from Kelle Roos, doubled their lead after Anwar El Ghazi had scored just before half-time.

Derby played within themselves for too long and it was not until the final 20 minutes that Frank Lampard’s team started to attack with any real conviction. Martyn Waghorn’s goal, nine minutes from time, gave Derby some late hope, but it was no more than that and Villa showed plenty of grit and resilience to hold on.

With so much at stake, it was perhaps not surprising that the game took a while to come alive. More than half an hour had passed before either side managed to register a shot on target as passes went astray and moves broke down far too easily. With tension filling the air, it was scrappy at times and hard to see where a goal was coming from until El Ghazi’s breakthrough.

If there was an element of good fortune about the way the ball ended up in the back of the net, the passage of play leading up to the goal was by far the best move of the first half as Villa, playing out from the back, broke from one end of the pitch to the other. A lofted pass from Republic of Ireland midfielder Conor Hourihane was the one that did the damage, releasing Albert Adomah in space on the Villa right where Ashley Cole, Derby’s 38-year-old left back, was left outnumbered.

Adomah cut the ball back to Ahmed Elmohamady, who had so much time and space that he was able to take a touch before curling a lovely right-footed cross into the penalty area, over the head of Richard Keogh. Jayden Bogle, the Derby right back, was caught on his heels a little as El Ghazi, darting across his opponent, threw himself at a ball that went in off his shoulder. Cue pandemonium among the Villa supporters.

Little of note had happened in the previous 44 minutes. Jack Grealish, who drifted in and out of the game, thrashed a 20-yard shot over in the seventh minute, and Tammy Abraham curled another effort over the angle of crossbar and post. As for Derby, there was no real purpose about their play, with Mason Mount’s shot from distance the only time that Jed Steer was troubled before half-time.

El Ghazi’s goal seemed to liberate Villa, whose bright and positive start to the second half was rewarded with another goal just before the hour mark. From Derby’s point of view, it was a dreadful goal to concede and questions will be asked as to how Roos, their goalkeeper, allowed McGinn to get to a high ball ahead of him.

El Ghazi was involved once again, cutting in from the left before thumping a shot that looped up in the air after Keogh had tried to block. Stood on his six-yard line, Roos tried to claim the ball with both hands, rather than punching, and McGinn accepted the invitation to nip in front of him and nod the ball into the unguarded net.

With Villa in total control, it was hard to see a way back for Derby, yet they roused and started to play with the belief that had been missing for so much of this game. Chances came and went before Jack Marriott, who had surprisingly been left out, controlled Bogle’s lay-off and drilled a low shot that flicked off Waghorn, another substitute, and past Steer. Villa, though, were not going to relinquish their grip on a game that had slipped through their hands a year ago. – Guardian