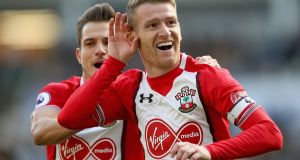 Steven Davis will earn his 100th Northern Ireland cap when his side take on Switzerland on November 9th. Photograph: Steve Bardens/Getty

Sunderland midfielder Paddy McNair is in the Northern Ireland squad for the World Cup play-off with Switzerland, despite only returning from an 11-month injury lay-off on Saturday.

The 22-year-old ruptured his anterior cruciate ligament last November and made his senior comeback at the weekend with an 11-minute cameo off the bench in the Black Cats’ 2-1 loss to Bristol City.

Yet, for an all-or-nothing tie against the Swiss to determine if the Northern Irish will be at the 2018 World Cup in Russia, international manager Michael O’Neill has named McNair as one of his 27 players for the two legs next month.

Nottingham Forest forward Jamie Ward, who missed the final five games of the group stage with a calf injury, is back and O’Neill has included Aaron Hughes even though the defender is yet to return from the calf problem that forced him to withdraw from the qualifiers with Germany and Norway at the start of the month.

Hughes has a chance to be back for Hearts against Kilmarnock on Sunday before linking up with his international colleagues in Belfast.

Having made 108 international appearances, the 37-year-old will surpass Bobby Moore as the home nations’ most capped defender ever if he features in either of these two games.

Hughes is one of just two Northern Irish centurions, along with goalkeeper Pat Jennings, though captain Steven Davis will join that club when he leads the team out at Windsor Park in the first leg.

O’Neill has also given Scunthorpe defender Rory McArdle a recall, with the 30-year-old winning the last of his seven caps in March 2014, while midfield duo George Saville and Jordan Jones are retained after winning maiden call-ups for the last qualifiers.

There are eight players in O’Neill’s squad that would miss the second leg were they to be booked in Belfast. Ward, Davis, Jonny Evans, Corry Evans, Oliver Norwood, Chris Brunt, Josh Magennis and Stuart Dallas are those all walking a disciplinary tightrope.