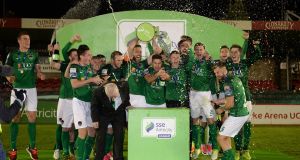 Cork City avoided the spectre of going winless in the final two months of the league season as Conor McCormack’s goal gave them victory over Bray Wanderers at Turner’s Cross.

Not since the 1-0 win away to Finn Harps on August 21st had John Caulfield’s side been successful in the league – they won three times in the FAI Cup in the same period – but victory always looked probable on the night the club received the league trophy for the third time.

Despite having big names rested, City took control of the game from the off, with Kieran Sadlier, Stephen Dooley and Karl Sheppard linking well in the attacking sector, Sadlier in particular giving the home faithful a glimpse of the influence he may wield next season when he is fully integrated.

He threatened early on, while only a good Hugh Douglas block denied Sheppard, but the lead goal came on 22 minutes. Sadlier was central, as his cross was half-blocked down but not cleared, and the following-up McCormack was able to send the ball to the net.

Sheppard thought he had made it two but the flag was up while Sadlier twice had shots saved by Peter Cherrie and McCormack and Sheppard shot over after similar corner routines.

A great chance of a second goal was denied by a fine Jason Marks challenge early in the second half just as Connor Ellis was about to shoot, with Sadlier, Sheppard and Jimmy Keohane having combined to give him a sight of goal.

After that, Bray did have a brief period with Aaron Greene having a shot deflected and then saved by Mark McNulty, while he then set up Gary McCabe, whose effort was blocked.

On 71 minutes, Sadlier drew a wonderful save from Cherrie, who was then quick off his line when Keohane almost played Sheppard in.

Sub Garry Buckley could have made sure of things on 85 minutes, but his shot didn’t do enough to work Cherrie, who saved with his legs. City had done enough on the night, and for the season, though.

Following a lifeless first half, in which seventh-placed Limerick was marginally the better side, the Hoops forged into a 53rd-minute lead through Miele’s 16th goal of the season from the spot.

St Patrick’s Athletic avoided relegation thanks to a share of the spoils against Derry City at Maginn Park.

And with the Dundalk victory at Eamonn Deacy Park effectively sealing Galway’s fate, the result of this fixture meant little.

Derry’s Rory Patterson was presented with the first scoring chance of the game in the 20th minute but his tame effort was directed straight at the body of goalkeeper Lukasz Skowron.

But it was St Pat’s who netted the all important opening goal five minutes later during their first serious assault on the Derry goal.

Full back Michael Barker broke forward from defence before finding Conan Byrne and while he opted not to shoot, he passed the ball square to the unmarked Killian Brennan who drove it high into the net.

Bohemians had too much for Finn Harps at Dalymount Park as they finished the season in a creditable fifth place in the table.

The better side from the start, Keith Long’s side should have been more than a goal to the good at the interval.

That lead came on 29 minutes when Izzy Akinade tried to work a one-two with Dinny Corcoran.

Philly Gannon stole in ahead of Akinade onto the return to bring a parry save from Harps goalkeeper Ciaran Gallagher.

The rebound fell kindly for Gannon, though, who bundled home his first goal for the club.

Akinade would make no such mistake as the Gypsies got their second goal on 62 minutes.

Hardworking skipper Derek Pender got to the end line on the left to cross for Akinade to score with a downward volley at the back post.

And the game was over as a contest there minutes later.

A 0-0 draw was enough to ensure Sligo Rovers retained their status as Gerard Lyttle’s side finished just outside the Premier Division drop zone.

A drab game exploded right at the start of the second half as Jack Keaney fired a thunderbolt which Stephen McGuinness managed to hold. Rhys McCabe then whipped in a cross which Greg Moorhouse turned just wide

Chances at both ends failed to hit the net as Sligo’s celebrations at the final whistle showed what the result meant to them.