Mourinho and Man Utd stick to the defensive plan

Matic the dominant figure as Spurs run themselves to a standstill 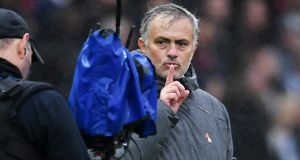 And then, of course, the sun also rises. On a boisterous, slightly wild day at Old Trafford, Manchester United produced a performance and a result that embodied the other side, the best side of this defensively voracious José Mourinho team.

Such are football’s tribal oppositions that a 1-0 home win against a Tottenham team lacking Harry Kane is unlikely to be seen as a wider vindication of the strangling defensive organisation that now defines Mourinho’s approach. The failure to press Liverpool’s flighty defence at Anfield two weeks ago will still provide a note of frustration.

But credit must also be given for days like these, not least in the level of organisation and physical intensity required to win a match in this way. Most of all there was evidence in a furious second half of the way this approach to winning matches can produce its own kind of rugged beauty.

At the final whistle Mourinho turned and directed an amusingly petulant shushing finger into the nearest TV camera. Are you not entertained?

Not that Mourinho was ever likely to change his approach here. He is often described, wrongly, as a pragmatist. In reality he is nothing of the sort, but is instead a dogmatist, a defensive tactician of unstinting principle – whether you like those principles or not.

But then, high-intensity team defence always looked the best approach here. Tottenham have been potent on the break in recent weeks. Son Heung-min offers pace in behind at centre-forward, but little else. This was a moment to stay true to Mourinho’s instincts, to produce a stifling first half and wait for Tottenham to blink.

And so they did. For long periods during that first 45 minutes the ball changed hands with a rat-a-tat staccato rhythm: long pass, poor control, chest down, long pass, headed back, 50-50, foul.

At one point Eric Dier let the ball bounce twice, paused, saw only red shirts massed in front of him, and hoofed the ball high into the United half, where Phil Jones scuff-volleyed it straight back. Both teams breathed and locked arms again.

A bit later Christian Eriksen produced a nice little dribble, beating three men 40 yards from goal. No matter, though. There were three more just behind.

After which, with a gurgle and a clunk, things did loosen up. Nemanja Matic began to hound Moussa Sissoko and Harry Winks, playing with real controlled aggression and eventually forcing a change as Sissoko was replaced by Mousa Dembélé.

With an hour gone and the rain swirling in every direction, including up, United began to attack with some fury; such fury that they finally had a shot from open play on target, Henrikh Mkhitaryan breaking ranks to shoot hard and low but close to Hugo Lloris.

As the game reached a pitch there was a relax of tension on the Spurs side, a feeling of an arm finally being twisted up behind the back. The goal came from three touches end to end, but it was a part of what went before like a haymaker hurled through the guard of a tiring heavyweight.

David de Gea punted long. Romelu Lukaku lost Toby Alderweireld and flicked on to Anthony Martial. He found the space in the inside-left channel to swivel his hips and tuck the ball inside the far post.

Old Trafford erupted. Jones beat his chest. Mourinho stalked his touchline, stooping to perform a slightly vicious looking celebration, like a man repeatedly puncturing an air bed with a pocket penknife. And for a moment there was a genuine, brutal kind of beauty about the force of will, the intense and unrelenting team play that had dragged this moment of slackness out of an otherwise rugged Spurs defence.

At the end of which United’s best players were both Mourinho players, both brought to the club this summer, both a part of that new-look spine. Matic was the dominant figure on the pitch, snapping into his tackles, finding pockets of calm in the fury and growing in spidery authority throughout.

In front of him Lukaku extended his goalless run in a United shirt to 293 minutes but still played with conviction, moving with real purpose across the front line.

Tottenham will feel unlucky. Dele Alli should have converted a chance just before United’s goal that might have skewed the story the other way. But he didn’t. Kane might have been present, a player who really does transform Mauricio Pochettino’s team. But he wasn’t.

Mourinho’s system does this when it works, reducing the game to a series of small, manageable, winnable details, and reeling in a Spurs team that ran itself to a standstill by the end. Guardian service