Tickets for Ireland v Denmark playoff selling for up to €550 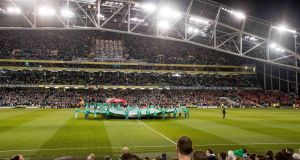 Tickets for Ireland’s World Cup playoff second leg encounter with Denmark are selling for up to €550 on secondary ticket websites. Photo: Inpho

The FAI has insisted that it has a “zero tolerance policy” towards touting and warned that supporters who buy tickets for the forthcoming World Cup playoff games through “secondary ticketing” websites like Viagogo risk not being admitted to the game next month.

Viagogo was this morning advertising tickets for both legs of the playoff with the company claiming to have around 150 tickets available for the game at the Aviva stadium on November 14th. Prices range from just over €150 to €536, while tickets for the away leg in Copenhagen appeared to range in price from €140 to around €400.

Tickets for the home game sold out within minutes when the association made them available last week and there was widespread frustration and some anger that the only seats available when the general sale started were at premium level and priced at €120.

It was clear at that stage that there was still considerable demand and that is what Viagogo and some other secondary sites are looking to cash in on, but association officials say that, where the specific seats being sold on these sites can be identified, the tickets will be cancelled and those purchasing them will not get into the ground.

It is unclear how effectively this system might work in practice but a spokesman for the association insisted that such action has been taken before and remains a distinct possibility on this occasion.

“What the sites are doing is not illegal at the moment but the association does try to stop it,” he said. “We have a zero tolerance policy and we actively pursue the issue wherever it arises. We would warn people considering buying tickets from sites like this that there is the possibility that they will turn up on the night and be refused admission.”

1 Waterford turn Kilkenny upside down and inside out
2 Jim McGuinness: There is a way to save championship and make it competitive
3 Waterford’s frenzied waves of attacks too much for Kilkenny
4 Klopp furious as injuries mount and VAR decisions prove costly
5 Sordid murder of hurling brothers still resonates in south Galway
Real news has value SUBSCRIBE
Crossword Get access to over 6,000 interactive crosswords