Man City made to work but run continues at West Brom 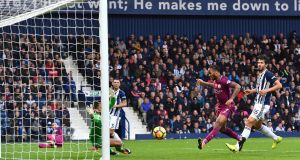 Leaders Manchester City strolled past West Brom to maintain their grip at the top of the Premier League.

Leroy Sane, Fernandinho and Raheem Sterling scored to clinch a 3-2 win at The Hawthorns and wrap up an eighth straight league win.

Jay Rodriguez briefly equalised for Albion and Matt Phillips capitalised on Nicolas Otamendi’s late mistake to give the scoreline a closer look than Albion deserved.

But Pep Guardiola’s City side remain unbeaten and sit five points clear at the top.

Guardiola had the added luxury of leaving Sergio Aguero on the bench, with the striker still chasing the goal to make him the club’s record scorer.

Tony Pulis’ Albion are winless in their last nine outings, have won just four times in 24 games stretching back to last season and now sit just two points above the relegation zone.

They had not beaten City in the league since 2008, when the City team contained Michael Ball and Benjani, and in their last 15 meetings the Baggies had drawn once and lost 14.

There seemed little hope that stat would improve early on with Ahmed Hegazi blocking from Sane — and it was just a matter of time before Guardiola’s men opened the scoring.

There was a sense of inevitably, especially with Sane having scored twice in City’s League Cup win in September, as the winger started a goal rush after 10 minutes.

The Germany international continued his Hawthorns hot-streak when he collected Fernandinho’s pass to drill an angled drive past a statuesque Ben Foster.

While it was expected to kick off a City procession Albion hit back just three minutes later when John Stones failed to deal with Gareth Barry’s lobbed pass and Rodriguez stole in to coolly lift the ball over Ederson.

Yet the hosts were only level for two minutes as Fernandinho’s 25-yard effort crept in off the post after clipping Barry.

There were just four minutes and 56 seconds between all three goals and enough action for the half as City controlled the tempo.

They still should have gone 3-1 ahead but David Silva planted a free header over after 27 minutes.

Salomon Rondon directed a header over just before the break but Albion’s raids were becoming less frequent.

Yet they could have levelled again with the first attack of the second half but, after a fine sweeping move, Grzegorz Krychowiak’s header flew straight at Ederson.

Normal service quickly resumed as the visitors camped in Albion’s half without immediate success, credit to the Baggies’ combative powers even if they lacked a spark going forward.

Two Kevin De Bruyne efforts flew off target but Sterling sealed the win in the 64th minute, three minutes after coming off the bench, when he applied the final touch to a sumptuous City move.

De Bruyne could have added the gloss late on but fired wide before Phillips struck in injury time after Otamendi failed to chest the ball back to Ederson.