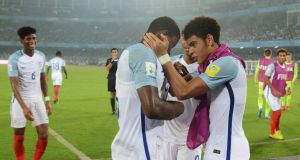 The England Under-17s became world champions on Saturday as Phil Foden’s brace and Rhian Brewster’s eighth goal of the tournament powered them to a 5-2 World Cup final win over Spain.

It was a sensational turn-around for Steve Cooper’s side after slipping 2-0 behind in little more than half an hour but they showed endless reserves of energy, enthusiasm and skill as they matched England’s World Cup-winning under-20s in style and avenged defeat to the same opponents in the final of the European Championship.

England have been the dominant force in age-group football in 2017, asserting themselves in a way their senior counterparts can only dream of, and in Manchester City playmaker Foden and Liverpool forward Brewster they have two of the nation’s most prized talents.

Brewster’s header gave England hope at 2-1 down, Morgan Gibbs-White grabbed the equaliser and from there it was one-way traffic, Foden producing a pair of smart finishes and Marc Guehi on target from close range.