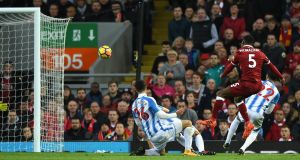 Liverpool manager Jurgen Klopp got one over on best friend David Wagner as Daniel Sturridge’s 100th club goal paved the way for a 3-0 win over Huddersfield at Anfield.

However, a brilliant striker’s finish from Sturridge broke their resistance just after the break and Roberto Firmino and Georginio Wijnaldum secured only Liverpool’s second win in seven Premier League games.

The result had looked far from secure after a dreadful first half, watched by the president of club owners Fenway Sports Group Mike Gordon who had flown in for the game.

Wagner, Klopp’s best man and former youth team coach under his long-time friend at Borussia Dortmund, had said he would park the bus as numerous visitors to Anfield had done before them with general success and he was true to his word with Huddersfield retreating into a 5-4-1 formation without the ball.

It had the desired effect in stifling what creativity the hosts, without the injured Philippe Coutinho and Sadio Mane plus under-fire defender Dejan Lovren who sustained a thigh problem in the warm-up, could muster.

Sturridge bounced one attempt into the turf and onto the roof of the net while Salah and James Milner both presented Lossl with easy saves.

Salah’s spot-kick — awarded much to the general bemusement of Anfield after referee Kevin Friend spotted Tommy Smith tugging Firmino’s shirt — was almost as comfortable as Salah blasted straight down the middle, with Jordan Henderson driving wide the rebound wide.

It was Liverpool’s 34th miss from the spot in the Premier League. No team has failed more times. Liverpool have now missed their last three penalties at Anfield with Milner, Firmino and Salah all culpable.

Salah had scored a crucial spot-kick to secure Egypt’s World Cup qualification but it still remained a strange decision that Milner, who has scored 10 of his last 11 penalties for the club, was not given the responsibility.

The boos at the end of a half in which Huddersfield had no shots and just 22 per cent possession were not unanimous but were audible enough to send a message to the players.

However, they were replaced by cheers — as much of relief than anything else — when Sturridge finished brilliantly, clipping a shot over Lossl after right-back Smith inadavertently headed the ball back into his own penalty area.

Sturridge reached his century in his 270th game, although his strike-rate for Liverpool is much better with 62 in 130.

He was denied a second when Mathias Jorgensen slid in to prevent the England striker rolling Firmino’s square pass into an open net but from the resulting corner the Brazilian headed in Milner’s corner for his first league goal in two months.

Huddersfield, unable to offer anything in response, were hanging on as Salah hit the post with a shot on the turn and Joel Matip headed wide from a corner but Wijnaldum blasted into the roof of the net to make it 3-0.